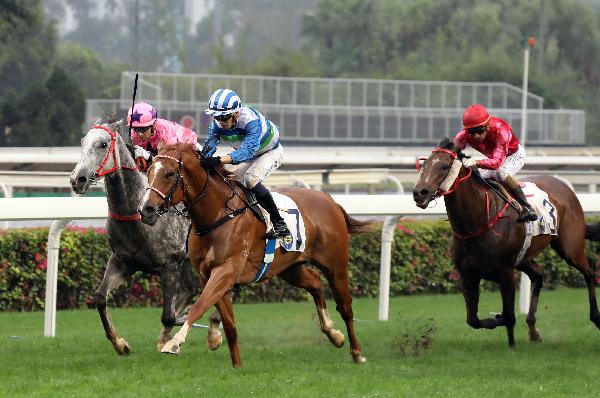 The 23/1 shot relished the rain-affected turf and dominated his seven rivals under an inspired Vincent Ho. But 10 lengths adrift of victory’s heady rush, the 1.8 favourite Aethero trailed in last after he over-raced and then suffered a rough passage on the home turn.

Voyage Warrior was never headed and sprinted down the straight to finish three-quarters of a length in front of runner-up Hot King Prawn in a time of 1m 09.48s.

“It wasn’t the plan to lead but my horse pinged the gate and everyone else was holding, they didn't want to lead, so I just gave him a soft lead and he ran home strongly,” Ho said.

“He enjoyed that ground a lot and he was so relaxed in front. Ricky’s horses are doing very well, the young ones too.”

Trainer Ricky Yiu – one win clear at the head of the trainers’ premiership – piled praise on the rider, who is fresh off completing a clean-sweep of the Four-Year-Old Classic Series aboard BMW Hong Kong Derby hero Golden Sixty.

“He’s a good jockey!” Yiu enthused as Ho and Voyage Warrior returned to unsaddle. “When you have a good jockey, you don't tie them down to instructions – they always have Plan A, Plan B, even Plan C, depending on how the horse jumps, he knows if the horse is racing too strong or whatever – the good jockey uses his own judgement.”

Voyage Warrior burst onto the scene last term with three wins from four starts, achieved in blistering fashion, but this term he had mixed his form with one win from five prior to today’s first tilt at Group company.

“He’s maturing and that has meant he’s had some ups and downs, he’s had bad patches, but he’s improving and each time he’s gone over 1200 metres he’s run better,” Yiu said.

The four-year-old has spent time in the relative tranquility of the Hong Kong Jockey Club’s Conghua facility and the handler credited that experience as being a key factor in the Declaration Of War gelding achieving his first high-class win.

“He’s been to Conghua – he’s been there about three to four weeks and he’s much more relaxed now, he’s not pulling like he was.”

Yiu expects to pitch his emerging talent into the G1 Chairman’s Sprint Prize (1200m) at FWD Champions Day on Sunday, 26 April, when he is likely to lock horns again with Hot King Prawn and Aethero.

After the high of Beauty Generation’s earlier G2 Chairman’s Trophy win, John Moore had to endure the frustration of seeing everything go wrong for his prized three-year-old sprinter Aethero.

The Sebring gelding was having his first start since a fine third in the G1 LONGINES Hong Kong Sprint (1200m) back in December. And, just as when beaten in Class 2 first-up this term, the chestnut fought for his head when Zac Purton attempted to settle him behind heels.

It didn't help that Aethero found stablemate and eventual third Thanks Forever blocking his progress on the turn for home but his chance was already blown by then.

“He missed the start and once he missed the start he got chopped out and that was the end of it. That’s the way we know things will go if he gets back in the field, he won't relax. I just hope he doesn't do it in the Group 1,” Moore said.

“Thanks Forever ran to expectations, he enjoyed the ground.”

“He’s honest, he tries his best and he is a good horse,” the Brazilian said. “I think the winner had everything go his way – my horse just ended up being in a spot that meant he didn't have a perfect race, particularly in the straight, when I was trying to come on his outside I had to switch back in. I wouldn't say it cost me the race but I would say it cost me ground. I’m happy with his effort and we know what is there for him in the future.”

Beauty Generation held off Ka Ying Star by half a length to win the day’s other feature, the G2 Chairman’s Trophy (1600m).