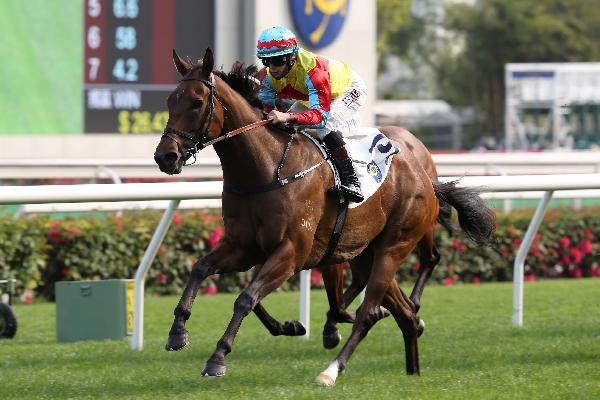 “He’s always been a very, very good horse to me, he has an incredible turn of foot, so I believe he is a top-class horse - I just hope he can bounce back and give his best, I have no doubt that with a smooth run he will do something good,” Badel said.

Preparing for his first foray at the top-level, the All Too Hard gelding – a six-time winner from nine starts – displayed G1 potential two runs ago when clocking an equal Sha Tin 1200m Class 1 record to that of the legendary Sacred Kingdom in 2007 (1m 07.80s), downing a string of renowned rivals – including the then world’s second-highest ranked sprinter Hot King Prawn.

“I can only be very confident in him, he’s done a great job so far, he’s very honest, he always tries hard, he has so much potential and plenty of quality,” Badel said.

But after breaking from gate 12 of 13 last start in the Sprint Cup, the 114-rater travelled three-wide throughout, slightly worse than midfield as the 2.8 race-favourite before closing off resolutely for fifth, while 178/1 chance Amazing Star won the race.

“He might have had a few excuses because of the wide draw, I also gave ground, even if I was able to slot in three-deep with cover he was still a bit keen in the run, so maybe the circumstances weren’t in our favour that day,” Badel said.

“I was a bit disappointed after the race because I was very confident and I expected a lot from the horse, the draw was difficult but in saying that he always gives me a super feeling, perhaps last time the circumstances just didn’t permit – I hope he can bounce back,” he added.

Forming a two-pronged assault alongside Rattan for trainer Richard Gibson, the pair are looking to secure the handler’s second win in the race after Gold-Fun prevailed in 2015.

“He seems well, it wasn’t a test, it was just a routine piece of work, he jumped out nicely but he doesn’t do too much in the morning which is good, he’s definitely more mature now,” the Frenchman said.

“I do think that he is a super horse, I believe he can bounce back, he’s been so good to me and I can’t be disappointed in him,” he added.

In search of his first G1 in Hong Kong, Badel also pairs with Hong Kong Classic Cup (1800m) winner Healthy Happy in the HK$20 million G1 FWD Champions Mile, facing the might of Golden Sixty and four others.

“He has such a big action, he’s able to lead fields over 1200 metres in trials, so he has very good speed,” Badel said.

“I’ll need to see the draw, but he can be a pace influence because he has such a big stride and he is also in good form - I’m glad we’re coming back to the mile because I believe he has very good speed,” the rider said.