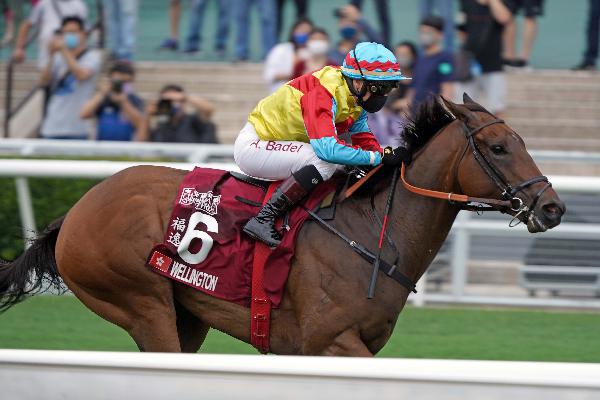 First-up since landing the G1 Chairman’s Sprint Prize (1200m) on FWD Champions Day in April, Wellington has overcome a “minor niggle” for trainer Richard Gibson and, based on recent trial performances, Badel is confident the All Too Hard gelding is ready to fire.

“I’m just glad to see him back at the competition because he’s such a good horse and I believe he’s going to run a strong race. I’m looking forward to it and let’s see how he goes,” Badel, fresh from a Happy Valley double on Wednesday (17 November), said.

“The horse feels good. His last trial was quite good, it was impressive. The horse showed good speed, he relaxed and responded quite well in the end, so I’m very happy.

“He’s always been quite an easy horse to get fit and, of course, he’s a very good horse so he always gives me a good feel. He might need that first piece of competition, he might need to have that run but he looks good, fresh and happy. His action is good as well.”

Badel is unfazed by the draw.

“I don’t think it’s a problem. He’s a very good horse, he’s very easy to ride. Just need him to settle and to be comfortable and he can finish off the race very well,” Badel said.

Wellington, who will carry 128lb, is unbeaten from two attempts first-up in Hong Kong.

Unbeaten in 14 successive starts, Golden Sixty completed preparations this morning with another 1200m workout, clocking a sedate 1m 27s for the journey with an unhurried 27.5s close.

“I can’t say he’s more forward this preparation than in others, but he’s more mature and sensible,” Lui said as his stable star heads into his final lead-up run before tackling the LONGINES Hong Kong Mile (1600m) on 12 December at Sha Tin.

Lui will also saddle luckless Glorious Dragon in the G2 BOCHK Jockey Club (2000m) on Sunday, hoping for an overdue change of fortune.