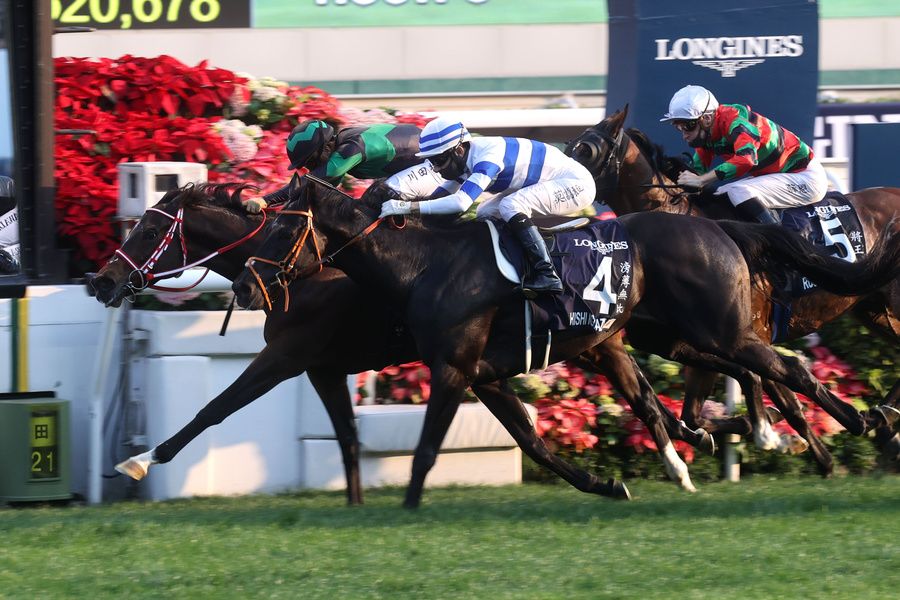 By Graham Cunningham
Loves Only You set the perfect seal on one of international racing’s most colourful careers with a spellbinding success in the HK$30 million G1 LONGINES Hong Kong Cup (2000m) on Sunday (12 December).

Yoshito Yahagi’s globetrotting mare has flown the Hinomaru flag from Dubai to Hong Kong and on to the USA then back to Sha Tin again in 2021, leading home a Japanese 1-2-3-4 in the G1 FWD QEII Cup (2000m) in April then creating history by becoming the first horse from her nation to score at the Breeders’ Cup.

Hong Kong’s richest race had been nominated as the final race of the Deep Impact mare’s career soon after she crossed the line in the G1 Breeders' Cup Filly & Mare Turf (2200m) at Del Mar on 6 November.

Her fifth long flight of the year took her annual distance covered to over 20,000 miles but Loves Only You was produced in perfect condition and completed the final leg of her global odyssey with a last-gasp success under the coolest of rides from Yuga Kawada.

The 36-year-old rider, who was extremely fortunate not to be brought down when previous winner Danon Smash was badly hampered in a dramatic G1 LONGINES Hong Kong Sprint (1200m) earlier in the day, was understandably thrilled to record his first HKIR success. “Thank you very much, I’m very proud,” he said.

“She jumped well. The pace was a bit slow but then she relaxed and I was able to find a good position. She’s given me two big presents and is the best female horse I’ve ever ridden. I hope she will be a good mother.”

Sent off the 2.6 market leader, Loves Only You jumped alertly from stall four and was soon travelling keenly just behind a steady early pace set by Mac Swiney, Ka Ying Star and the wide-running Bolshoi Ballet.

Russian Emperor made a bold move to hit the front as a packing field jostled for position early in the home straight but last season’s BMW Hong Kong Derby (2000m) runner-up edged right with his tongue lolling out as he did so, placing Loves Only You in a pocket on the inner at a crucial point.

Hishi Iguazu produced a storming run from the rear on the outside soon after under Joao Moreira to draw level briefly well inside the final furlong.

However, Kawada had Loves Only You in fully cry by this stage and the five-year-old repeated her Del Mar heroics, quickening valiantly between horses under pressure to lead close home and beat her fellow Japanese raider by a short head.

Russian Emperor ran the race of his life for Douglas Whyte and Blake Shinn to finish a length away in third, while British raider Dubai Honour never looked like becoming the first European runner to win the Cup since Snow Fairy in 2010 but stayed on powerfully for fourth once in the clear for William Haggas and Tom Marquand.

Three years on from seeing his star filly Lys Gracieux beaten narrowly by Exultant in the G1 LONGINES Hong Kong Vase (2400m), winning trainer Yoshito Yahagi was completing an incredible end to 2021 which has also produced a 50-1 Breeders’ Cup Distaff success for Marche Lorraine and a commanding Japan Cup success for his superstar colt Contrail.

The colourful 60-year-old was unable to accompany Loves Only You on the final leg of her journey but his stable representative Yusaku Oka was on hand to savour a perfect finale.

“I’m so glad to win this race for our trainer, who is watching on in Japan,” he said.

“She won the Breeders’ Cup very well and in the spring she came over here and had a good result, so we were always confident she would run well.

“She’s got a good pedigree — so we are looking forward to the next stage of her career — and as we have quite a lot of good horses in the stable we hope we will be back in Hong Kong with them in the future.”

Dusk was gathering over Sha Tin as an elated Kawada left the racecourse on a day that illustrated every aspect of the joy and pain that defines racing at the highest level.

The sun is also setting on Loves Only You’s racing career but, if the 2021 edition of the LONGINES Hong Kong International Races confirmed one thing, it is that the Land of the Rising Sun is now a true powerhouse on the global racing stage.

Following in the footsteps of A Shin Hikari, Maurice, Win Bright and Normcore, this success for Loves Only You means Japan has now won five of the last seven Hong Kong Cups and four of the eight HKIR races run in the last two years.

HKJC racecaller Mark McNamara summed up the latest thrilling finish to Hong Kong’s most cherished prize by saying: “It’s Japan 1-2, Loves Only You says sayonara with the Cup!”

Leave them wanting more is never a bad motto. But, who knows, maybe Japan’s latest Cup queen will have a son or daughter to represent her on the LONGINES HKIR stage in years to come.