Yiu’s on top and Shining, Moreira and Purton match strides 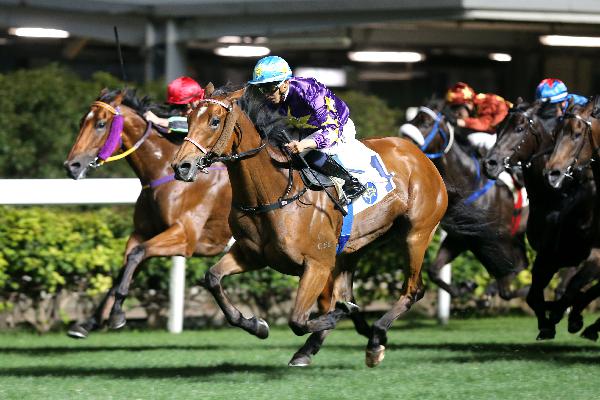 By David Morgan
Ricky Yiu’s steady, unwavering progress towards what he hopes will be a first trainers’ championship continued at Happy Valley tonight (Wednesday, 29 April) thanks to Shining Gem’s (133lb) darting late burst.

Vincent Ho’s cool head had the top-weight positioned for a sprint finish off the turn in section two of the Class 3 Causeway Bay Handicap (1200m) and Shining Gem did not disappoint. The four-year-old’s length and a quarter supremacy gave Yiu his 53rd win this term and a six-win advantage over his nearest pursuer.

“He’s a very genuine type, he showed as a three-year-old last season that he had potential to win races. We always had quite high expectations for him and now he moves into Class 2, he’s a nice, genuine type,” Yiu said.

“The draw (one) helped today — last time he was drawn wide — and he’s consistent. When Vincent asked him, the acceleration was there.”

Ho, who landed his first Group 1 win on Southern Legend in Sunday’s FWD Champions Mile, moved onto 52 wins in what is already his best ever season by some margin.

Joao Moreira maintained a slender three-win advantage over jockeys’ premiership rival Zac Purton, with both landing doubles to end the evening 109 wins to 106.

The Brazilian increased his haul when Simply Fluke made it two wins in as many runs since his switch to the Douglas Whyte stable, with both successes coming under Moreira and both from the widest gate of all, 12. The five-year-old charged home from the tail to take the Class 4 North Point Handicap (1200m) by three quarters of a length.

“I just allowed him to find his own rhythm. We know he’s got a good turn-of-foot and he’s the type of horse that if he gets there a bit too early he can lose concentration. He felt that way last start when he won,” Moreira said.

“He built up a good momentum, they went quite fast in front and they were always going to be coming back for me on the home straight. His last section of the race was really good and he might win another one.”

Purton was not to be outdone though in his battle to keep the title he’s won for the past two seasons — both riders have captured the Hong Kong title three times. The Australian scored easy wins on Happy Warrior and Sky Show.

The Jimmy Tung-trained Sky Show exhibited smart potential with a two-length score in section one of the Class 4 North Point Handicap (1200m). The three-year-old clearly benefitted from his debut last month.

“He’s a nice horse and physically he looked well. He came out of Conghua trials where there was no pressure so he went to the races on debut a bit big, he had that competitive run and a good trial and that just brought him on,” Purton said.&nbsp;

Purton had earlier positioned Happy Warrior to stalk Focus, a reluctant leader in the Class 4 Quarry Bay Handicap (1650m), and quickened on by the eventual second down the straight to pass the post a coasting three quarters of a length ahead.

On a night of doubles, that sealed an early-card brace for trainer John Moore.

“Drawing the plum gate (one), getting the gun run and having the horse with the speed to hold that position, they were the key factors. Zac said to me ‘you must have been jumping up and down going to the corner’ because he was going so well,” Moore said.

“He hit the line strongly, it was a cheeky win and that will put him in Class 3 down the bottom. He deserved that win.”

The handler took the opener, the Class 4 Tai Hang Handicap, with Gala Night who set a new Class 4 record time for 2200m of 2m 16.06s. The three-year-old rallied gamely for Derek Leung after Bullish Glory edged the lead but lacked the necessary conviction through the final 100m.

“That was ridden to perfection with respect to Derek following instruction. I told him what I wanted — the horse is suspect at 2200 (metres) if he’s in front, so I wanted him to get in the box seat, get into the slipstream and I believed he’d get the trip here. It was a beautiful ride and the horse was in for the fight.”

Leung also headed home with two wins on the board when Irish import Delightful Laos opened his Hong Kong account at the first attempt. The Tony Cruz-trained three-year-old won a Dundalk maiden by more than two lengths last October and suggested a bright future with a length and a quarter score tonight.

“It’s his first run here and that was the first time I’d sat on him but he gave me a good feel, he raced with maturity and I think he has a good future,” Leung said.

Dylan Mo arrowed the Me Tsui-trained Good For You on an overhauling run that saw him power to a two and a quarter-length triumph in the finale, section one of the Class 3 Causeway Bay Handicap (1200m).

Hong Kong racing continues at Sha Tin on Sunday, 3 May.