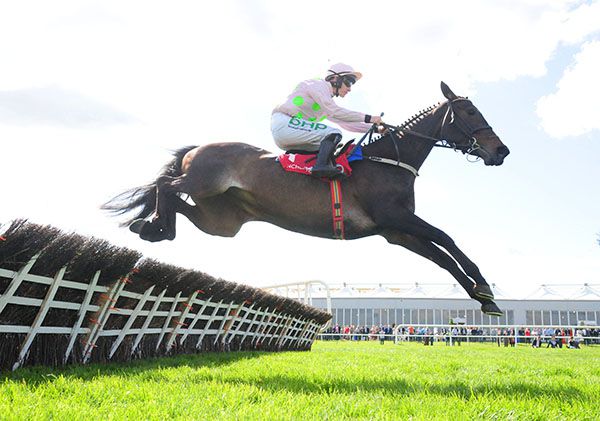 Benie Des Dieux was made to work for her victory in the Annie Power Mares Champion Hurdle at Punchestown but got the job done in good style in the end.

Stable-mate Stormy Ireland made the running in the two-and-a-half mile Grade One and looked for a minute turning for home that she might nick the race.

Paul Townend had to get serious with Benie Des Dieux to launch her challenge going to the last flight but the 2/5 shot soon got on top.

She put the race to bed on the run-in, powering clear in the closing stages to record a nine-and-a-half length success.

The French-bred mare was gaining compensation for an agonising last flight fall in the Mares Hurdle at Cheltenham and was repeating her victory in this contest 12 months ago.

A trip to her native land for the French Champion Hurdle could be on the cards now.

“I thought there was upset on the cards for a minute. Stormy Ireland ran a cracker and she was just getting away from Paul, he wasn't cruising past her like I thought he would,” said Mullins.

“Paul said to me that he felt the ground was drying up every minute and that she just wasn't relishing that ground.

“She got the job done. She didn't want to get down and gallop on it. It's just been an extraordinary dry winter, I know they've put a lot of water on it but you just can't replicate having a months rain.

“We'll see how she comes out of it. The French race comes up very quick but we'll see in the next week how she gets over that. We'll have to look at the French Champion Hurdle.

“She's done nothing all year so maybe a bit of hardship mightn't do her any harm at this stage of the game.

“There seems to be more prize-money for her over hurdles and I wouldn't go back chasing unless we got real winter ground next season.

“Unless there are real good prizes I don't think there is a necessity to risk her over fences.

“Stormy Ireland is so brave. She's so small, she's only about 15-3, and there's nothing of her but she has a heart as big as a lion. Hopefully she'll get a real good reward one of these days. She'll definitely go back to France, maybe the Prix la Barka or something like that will suit her.”