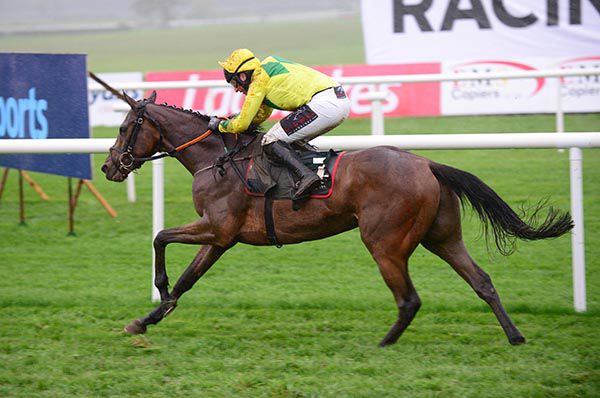 Festival D'ex made a winning debut in the prestigious, and valuable, Goffs Land Rover Bumper at Punchestown today as the Gordon Elliott trained gelding won under a well judged ride from jockey Jamie Codd.

Held up off the pace in the 19 runner race, worth E59,000 to the winner, the son of Saddler Maker made headway in the final half mile and turning in, went in pursuit of clear leader Whatsnotoknow

Once Codd asked Festival D'ex to quicken, the gelding responded very well, skipped past Whatsnotoknow with two furlongs to race before going on to beat that rival by a comfortable ten lengths.

Afterwards Elliott stated “I’m delighted for John (Doyle, owner) who is a big supporter of the yard. He invests a lot of money and Bobby O’Ryan advises him on what to buy. This is his local track so it’s great.

“The horse is very babyish and came up the home straight with his ears pricked so he’s a horse for the future.”

Jockey Codd added “he’s still very immature mentally but Gordon had plenty done with him and he was very fit."