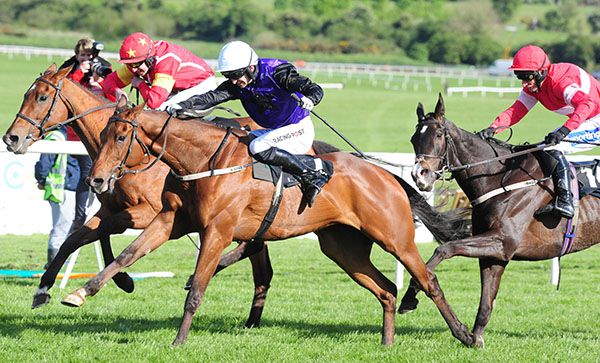 Champion trainer Willie Mullins dominated the €100,000 Ballymore Handicap Hurdle at Punchestown as Mr Adjudicator led home a clean sweep of the first four places for team Closutton. Contingency was produced to lead turning for home in the two-and-a-half mile contest but was pressed going to the last by the top-weight.

An untidy jump put Mr Adjudicator on the back foot but he rallied well for Patrick Mullins on the run-in to get on top close home and record a three-parts-of-a-length success at odds of 20/1.

Contingency held the second, getting home by a half length from Dorrells Pierji who had pressed the leading pair from the last.

There was another two-and-a-quarter lengths back to Stratum in fourth.

The winner was bouncing back from a disappointing show at Fairyhouse where he had pulled up before the fifth flight. Ruby Walsh had reported he had been reluctant to race that day.

“It was a good performance under that weight for a five-year-old,” said Mullins.

“He got into a bit of trouble and made that mistake at the last but he picked up well.

“He might be a bit high for the Galway Hurdle but he'll definitely go back on the Flat.

“I'm delighted for Mr Bobbett as I've had no luck for him this season.”

Patrick Mullins added:- “Carrying me around and lugging top-weight is not easy for a five-year-old but he’s got a lot of class and stepping up in trip might have brought about a bit of improvement.

“He just jumped out to his left all the way which isn’t ideal.”