On to Punchestown now for Sweeney with Cork winner Roseys 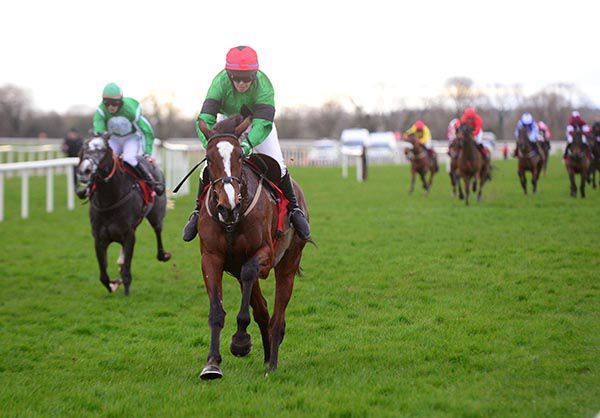 Cork men Davy Russell, Rodger Sweeney and Paul Townend kept the locals happy with earlier winners and it was the turn of Kildinan handler Jonathan Sweeney to send some of the students day punters home on good terms with themselves with his win in the mares bumper with Roseys Hollow

From the family of Big Zeb and a half-sister to Masons Daughter, Roseys Hollow was held up early, and she improved to chase the leaders after six furlongs.

Fifth halfway, the Sweeney runner challenged four furlongs out, and she led over three furlongs out.

Ridden a furlong and a half out, Roseys Hollow kept on well in the final furlong to defeat Miss Cedille (14s into 7s) by three and three parts of a length.

They left Another Copper all of twenty four lengths back in third.

"She is a grand big mare and we are delighted with that," said Sweeney.

"The thought coming here was to follow a former horse of mine Minutestomidnight and go to the Punchestown festival for the Graded Mares Bumper but she had to come and do this.

"She was never away in a schooling race and we were ready to run in a point to point last year but she was short a couple of schools and she was left off. When she came back in I thought she'd be ready to run at Christmas but she was just growing and I took my time with her and fair play to the lads for waiting.

"I have 12 horses at the moment and I am trying to expand the whole time. I'd love to keep her but money talks."

The Irish Horseracing Regulatory Board Veterinary Officer reported to the Stewards that Hidden Sapphire trained by Patrick G.Kelly was found to have blood at the nose following exercised induced pulmonary haemorrhage.