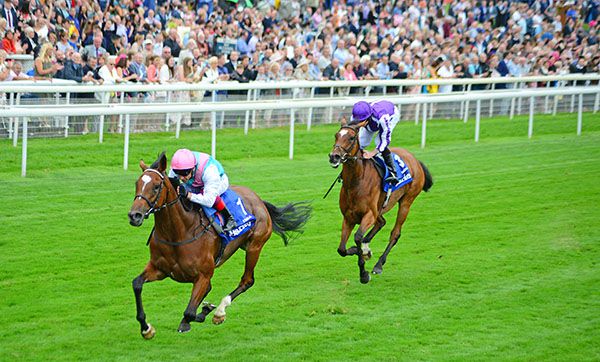 There's little doubt patience is starting to fray with the restrictions that have applied since June 8 when action was allowed resume behind closed doors. Publicly, the party-line about being happy and relieved racing is taking place at all gets reeled off. Privately there's plenty disgruntlement about the protocols and their practical operation.

That's just grumbling from those at racecourses. As the weeks have gone on there is also increasing exasperation among those not allowed to go racing and a sense that Horse Racing Ireland isn't pushing the case hard enough for a relaxation of restrictions that will allow some members of the public get back to tracks.

Now that racegoers are allowed in France provided they wear a facemask, and Goodwood will host a trial fixture in front of a 5,000-strong attendance on August 1, the clamour for Ireland to start permitting racecourse attendance again is likely to intensify. The contrast with how even owners won't be allowed back here until August 10 at the earliest will seem even more glaring.

When livelihoods are wrapped up in accelerating a return to some kind of normality it's easy to understand how frustrating it is when progress seems to stall. Inevitably comparisons are made with other sectors and how they make their case to government.

But how racing plays its hand in the coming weeks is of strategic importance. In the face of rising numbers of positive cases, and widespread predictions of a second surge of coronavirus, optics will be vital.

British and Irish racing may be two sides of the same coin in many respects but comparisons to a jurisdiction that has handled the Covid pandemic disastrously is hardly in anyone's strategic interest. Neither is pointing to an organisation like the GAA and arguing that it's fighting its corner better. In fact an amateur body pushing for more people to attend matches during a pandemic is an own-goal.

As the shop window of an industry worth so much, that involves so many jobs, and is essentially non-contact, racing can justify itself much more easily. But a sector in receipt of state finances, and which had to pull out all the stops when lobbying cautious health authorities for a resumption in the first place, has to play its hand ultra-carefully.

In the context of a health emergency, pushing for owners to be permitted watch their horses run will be a tough sell to a hard-pressed public. Nor will allowing people a day out at the races strike many as being an urgent priority. As for bookmakers they're hardly top of the queue when it comes to widespread public sympathy at the best of times.

They're all entitled to fight their corner. But blaming HRI for toeing the government line is futile when there's little realistic alternative. In fact a good case can be made for racing being ahead of the game in terms of being allowed continue as it is with lines looking blurry in relation to details such as outdoor gatherings of no more than 200 people being permitted.

The substance of a niggling issue such as only one groom per runner being allowed on-site is valid on a number of fronts, not least the safety of those dealing with highly-strung thoroughbreds. In such circumstances the sight of security staff in high-vis jackets appearing to stand around for the sake of appearances might ordinarily make for an odd contrast. But these are not ordinary times.

No one can pretend it's in anyway ideal: but it could be a lot worse for a lot of people. There are many other sectors looking on enviously at racing's set up right now. Racing will continue to fight its corner because it is entitled to. But failure to appreciate the importance of public perception in all this would be a costly strategic blunder.

Attending another behind closed doors fixture at the Curragh on Saturday only underlined just how functional they are. No one could ever mistake them for anything other than a hollow pastiche of what passes for a normal race meeting. Instead they feel like a ghostly stoic exercise in keeping calm and carrying on.

The bare essentials are there. What's missing is that vital frivolity. Rarely has racing seemed more industry than sport. This is about opportunities for horses to run and punters to bet on them. That that's enough for many parts of the industry to tick along in a time of crisis, including a lot of racecourses, is instructive in terms of any post-Covid future.

Finally the prospect of another clash between the old rivals Enable and Magical in Sunday's King George at Ascot is enthralling, particularly given Aidan O'Brien's comments about his mare's physical transformation over the winter.

After her smooth return to action at the Curragh in the Pretty Polly Stakes last month there was no hiding O'Brien's happy surprise at how Magical has apparently bloomed from four to five. He described it as "something really strange happened the way she changed over the winter." Seamus Heffernan was also moved to describe her as being as good as he's ridden.

Magical hasn't finished in front of Enable in five attempts. The latter also looked to have enjoyed a perfect tee up for the King George with her run in the Eclipse. Ordinarily it would look like being a case of business as usual. This however could be a very different ball game. A Magical victory might also reverberate down the line in terms of other older stars being given more time to reach their racing peak before being sent to stud.