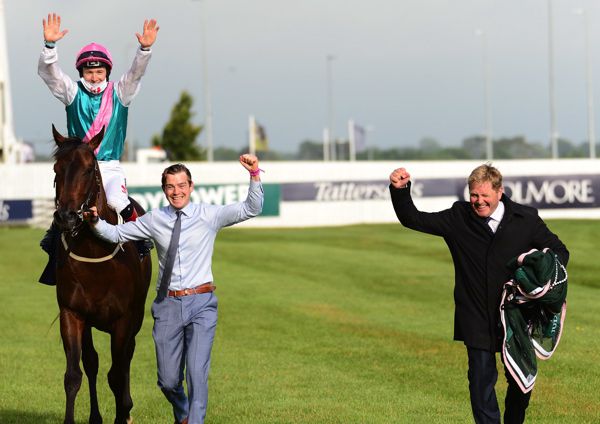 Lyons is the first to say he is doing nothing substantially different now compared to what he's always done. Neither is it hard to imagine Ken Condon agreeing on that point after his own Guineas victory with Romanised a couple of years ago. Jessica Harrington didn't suddenly stumble on some wonder technique when readying Alpha Centauri to land the 1,000 the same year. In 2016, everything aligned to give Adrian Keatley a classic with Jet Setting.

Five years ago none of these trainers were to the forefront of most people's thoughts when it came to classic contenders. They were pigeon-holed differently, Harrington for instance as a jumps trainer, Lyons as a plucky operator taking on Ballydoyle & Co with comparatively inexpensive buys. Given the opportunity to handle a top-class horse though all their experience and ability came to the fore and helped mould top-class winners.

Such evidence once again highlights the difficulty of quantifying the extent of trainer input into which horse passes the post first. It's an old conundrum, and one impossible to answer definitively because of the variables involved. But Siskin's superb success underlined once again the depth of training talent capable of delivering the goods when given the suitable raw-material.

The media narrative is invariably to lionise the winner, measuring the sometimes millimetres wide difference between success defeat in terms of a meritocracy. So Lyons's burst into the very top-rank can be portrayed in terms of being somehow inevitable. It's a neat fit to argue that cream rises to the top and that if you pay your dues you eventually get your rewards. Except we all know that's not always the case.

Lyons has made his own luck to the extent that it prompted Juddmonte to send him horses in the first place. They're not exactly short of options about who to send horses to, even those not obviously bred in the purple. As a son of First Defence, Siskin appeared to fall into that category. But he possessed a touch of brilliance from the start and, crucially, a pedigree to allow him sustain it. Lyons has masterminded his career superbly.

However does winning a classic with such a colt rate a better training performance than getting a patched up 45-rated handicapper to win a couple of races? What's the greater feat of training?

On Saturday, Lyons said Siskin was the easiest horse to train. During Sea The Stars' momentous 2009 campaign John Oxx suggested his job was to stay out of the way as much as possible. Great horses are just great and that was it, he said. There's a pressure that comes with the top-flight. But it's the kind of pressure that those trying to find a spot for moderate animals can only dream about.

Successfully training at the highest level involves many factors including talent, drive, diplomacy, ruthlessness and, yes, luck. Luck is always made to some extent but the vagaries of fashion means nothing can ever be taken for granted. Oxx's fortunes over the last decade are proof of that. Attention to detail is a trite explanation of why some trainers are on top and others aren't. You can be sure Oxx's attention to detail is as exact as it was in his pomp. There's more than that to it.

Ultimately it's all about winners which is the ultimate cliché although success breeds success runs it close. It will be fascinating then to examine the fortunes of Lyons and his jockey Colin Keane on the back of Siskin. With proof in the bag that they can do the job Juddmonte would be well justified in backing them even more. Might Coolmore even divert a Galileo or two towards Glenburnie. Renowned as a straight-shooter, Lyons is on the verge of being able to fire some heavy artillery.

The behind closed doors atmosphere at the Curragh for the Guineas meetings was inevitably subdued. Crowd shots from the past during RTE's coverage felt almost jarring in the circumstances. Despite the low-key ambience there was plenty to appreciate about the coverage itself with Ruby Walsh in particular bringing both authority and a readiness to treat the audience to more than just platitudinous waffle.

It will be interesting to examine viewing figures for the two days when they're released. The coming weeks have been billed as an opportunity for racing to sell itself. The first of a series of one-hour magazine type programmes is planned for this Friday. In the absence of any other live sport, RTE is giving it welly although the national broadcaster has described this as a short term commitment. Figures though are always the bottom line when it comes to commitment.

Finally, Royal Ascot, the most famous social event in racing, will be all about very much the new social this week. As such it will be a hollow occasion. Like it or not, the most concentrated festival of racing excellence has always been about more than racing.

The actual sport should be undimmed. It will be as competitive and cutthroat as ever with every move possible made to win. So we can look forward to yet more accidentally on-purpose drifting of the sort that takes place most every day of the week, and especially when it counts most, as well as perhaps more evidence of how pitifully convoluted interference rules fail to control it.

There might not be an example as spectacular as William Buick's effort on Well Of Wisdom at Sandown on Saturday when he all but put a rival over the rails but, hey, no problem, it was accidental, the horse could keep the race and the jockey was left unpunished. So going into the biggest week of the year the message that such riding is effectively condoned has been received loud and clear.