Sorry About That Chief 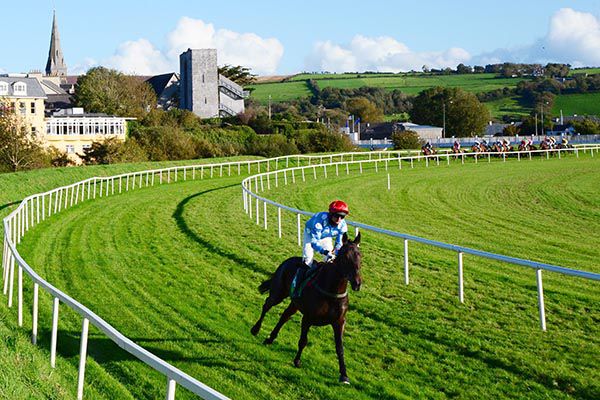 In case you missed it, Costalotmore, a 20-1 outsider for last Wednesday's bumper, took the lead soon after the start, stretched further and further clear, and eventually won by 39 lengths under jockey Tiernan Power-Roche. None of his 14 opponents laid a glove on him. They got things spectacularly wrong in assuming Costalotmore would come back to them. Yet a stewards enquiry basically dismissed it as one of those things, nothing to see here, and move on.

Maybe that's a little unfair but all we've got to go on is a stewards reports which 'revealed' that they heard evidence from all the riders, who "collectively were of the view that the winner had ran free for much of the race and slipped the field before maintaining this lead to the line, (and) having viewed a recording of the race and considered the evidence, the stewards noted the explanations offered." Basically nothing that couldn't be gleaned from just watching the race: just sorry about that, chief.

It's not necessary to be some kind of anti-mask 'it's all a fix' conspiracy nut-job to believe that's a long way from being good enough.

Only the most paranoid punter can believe it was some sinister conspiracy to deny them a run for their money. That such a tiny extreme minority exists can't be denied, just as it is obvious that everyone makes mistakes even though they don't mean to. But that isn't some free-pass for everyone to shrug their shoulders and do nothing. Footballers don't mean to trip up opponents in the penalty box. But they're still penalised.

By any fair standard the jockeys behind Power-Roche on Wednesday didn't take reasonable measures to give their horses every opportunity of winning. That it was a series of blatant honest mistakes rather than anything more cunning or corrupt is clear. But to dismiss the matter with a risible slap on the wrist about explanations being noted - and dispensing the minimum of information - is taking the betting public for mugs.

Onto more edifying matters and the prospect of this Sunday's Prix de l'Arc de Triomphe. The uncertain times we live in are underlined by how only a couple of weeks ago talk was of up to 20,000 people attending Longchamp. That quickly dropped to 5,000 and now only a thousand strong attendance is likely if they're lucky. It will make for a hollow Arc in event terms which is a pity considering the headline acts.

No doubt the principal focus in the build up will be on Enable's attempt to become the first horse to win Europe's greatest all-aged race on three occasions. She has been a wonderful mare and like so many things true appreciation of her stellar career probably won't come until after she's gone. But sentiment doesn't cut it at this level. Even at her peak Enable might struggle to win this Arc. And at the veteran age of six the odds must be that that peak is in the rear-view mirror.

I suspect that if Love was a colt she might end up odds-on this Sunday. There's still a widespread suspicion about fillies being more unpredictable when it comes to consistently delivering on the big day. It's a prejudice that Enable's own career signals as silly. The same applied to superstars such as Goldikova, Zarkava, Ouija Board and Zenyatta. Mentioning Love in such terms is still premature but her best is surely still to come. Should she win the Arc in style then Enable's throne will have a worthy new occupant.

Certainly if Love continues the progression she has shown through the Guineas, the Epsom Oaks and the Yorkshire Oaks she should be extremely tough to beat. Enable apart, the market believes her biggest threat is from Stradivarius. He's a wonderful stayer but winning an Arc requires very different strings to your bow. Love's stable companion Serpentine may get supplemented although he has a lot to prove on the back of his comeback run earlier this month.

The shape of the rest of the Ballydoyle team will become clearer through the week but them apart, much of the rest of any meaningful opposition looks to come from other fillies. As a three year old Love will carry just 8.9 on her back. That means she will get 10lbs from older males and 6lbs from older females. That includes Enable. Soft ground may end up being a complicating factor. But right now it's hard to picture any horse successfully conceding that sort of weight to such a talent.

Further to last week and the importance of perception around Dreal Deal's spectacular gambled-on victory at Navan, it has been put up to me to explain why it's OK for jockeys and trainers to be in commercial bed with betting organisations and yet when a small stable scores with a gambled-on winner it suddenly doesn't look good.

And the straightforward answer is that I can't. It's hardly a like with like situation but nevertheless some of us are blue in the face pointing out how these 'ambassadorial' roles are a needless self-inflicted reputational injury. Yet it too continues to get treated as a nothing-to-see-here situation, another case of everyone just move on.

Finally, as we face into a winter of unique discontent due to coronavirus, can everyone keep in mind that it's going to get very cold and very wet over the coming months. Obviously that's not a headline. But it's the sort of mundane meteorological consideration that seems to get blithely dismissed by those who argue that spectators need to be allowed to go back racing sooner rather than later.

Yes, racing itself is an outdoor activity, but in spectator terms only until it starts lashing down. Then anyone with tuppence worth of sense runs for cover. And yes in such a situation social distancing indoors comes into play. But facing into the winter basing an argument for why you're different on a summer scenario of everyone outside enjoying sunshine looks a ropey longshot. Then again they do come in sometimes, particularly when they get a solo.

For the first time, since its inception 30 years ago, Irishracing.com is no longer a part of the Irish Times Group. The website which began with basic Irish racing fixture information and race cards under the domain name irish-racing.com has developed over the years into the resource you see today.