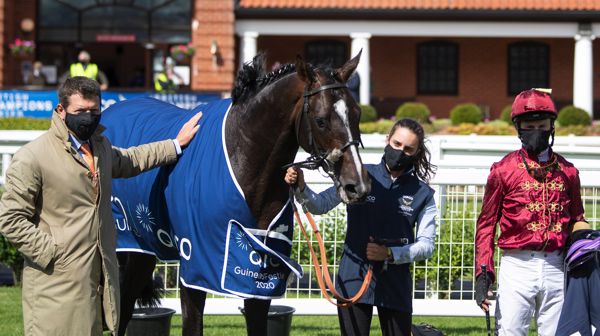 Except of course there's nothing inevitable about the course of this Covid-19 pandemic. That the government has speeded up its national recovery plan - cutting the original five phases to four - is a reflection of the situation now. There's nothing inevitable about it remaining the same. South Korea and Iran are among those countries learning the hard way how restrictions can have to be re-imposed when there's a renewed spike in positive cases.

Pondering whether it was the government speeding up reopening that prompted a change in the national mood or it's the other way around is a bit like which came first, the chicken or the egg. But amidst the widespread relief at racing's resumption there already appears to be some impatience to kick on and examine the practicalities of when the public might be allowed go racing again.

Maybe it's a result of the government's announcement on Friday but the bleak reality on the ground today will be old hat in some quarters.

There's a danger in that, just as there is in pushing for a return of some paying customers to racecourses sooner rather than later. The atmosphere, or lack of it, at behind closed doors fixtures underlines how important crowds and the bookmaker ring are to the racecourse atmosphere. Maybe it's the nature of the beast to push for more when the going looks good. But it runs the risk of pushing too soon for too much.

Horse Racing Ireland is seeking clarification from government about the final phase of its roadmap to recovery. That has been brought forward to July 20 and contains the line about attendance at sports events being allowed resume at that point but with restrictions on numbers. The key question is what figure will that restriction be. If it is 500 then it's a moot point. If it's more than that, then the prospect of paying customers becomes more real - and just in time for Galway.

Complicating factors abound, such as how restaurants and some bars will be allowed re-open in phase three in three weeks time. Racecourses contain restaurants and bars. Some might argue that constitutes a reason for them to reopen with, of course, all the social distancing measures that all businesses are going to have to budget for. Might a large facility such as Galway be an ideal location to cope with, for instance, an attendance of a few thousand paying customers?

It might well. There will be an economic argument for other permutations that encourage the public to venture back towards some kind of new normality at tracks. Fears have also been expressed that that once the public gets out of the habit of going racing, and instead comes to rely on it as a purely screen experience, that they might be lost forever.

It's just a hunch but that point may be being overplayed. It could be applied to all sports but it's not being presented as any long-term problem in football or GAA for instance. And the reality remains that for most fixtures attendances are a superficial financial element anyway, as well as largely superfluous to the actual staging of racing. It's the return of betting shops in Ireland, and the UK in particular, that will be reassuring for most racecourse executives.

As has been pointed out repeatedly in recent weeks, racing will have the live competitive sporting stage to itself for a while. The following link is another variation on the theme although a phrase or three might be familiar - Horse racing has chance to lure new fans as first sport to return

It's a theme picked up by Richard O'Brien in his own blog. The Co. Limerick trainer worked as a dentist before turning his hand to training and some of us should be counting our blessings that he didn't turn to scribbling instead. By now he might have found the button for paragraph breaks!

His latest offering examines how racing might make the most of being the only show in town. O'Brien admits he doesn't know how precisely. But he is adamant that "the cloak and dagger side that hangs around horse racing could do with being binned." He is also correct to point out this obsession in the game about being considered a good judge. The worst insult is to be considered any kind of mug which, the more you open your mouth, the more chance there is of being wrong. But so be it.

O'Brien is also bang on the money when pointing out the danger of dumbing down the game in order to appeal to any floating audience.

"Racing is rife with pointless drivel, meaningless reflections that are an insult to the serious followers of the sport, of which there are many," he writes. "It's a complex game, anything interesting and worth pursuing is. Let it be complicated; viewers, followers, punters will keep up." Amen to that.

By most accounts it was a very eerie experience on track at Newmarket for the Guineas, a sign of just how singular the times we're living through are.

Love was extremely impressive in the 1,000 considering she was probably just as ill-suited by a muddling early pace as the favourite Quadrilateral. Between her and Wichita's fine effort in the 2,00 Guineas, and even Anthony Van Dyck's second in the Coronation Cup, it appears the Ballydoyle battalions are ready with a vengeance for the summer campaign.

In years to come though what the weekend will perhaps end up being recalled most about is for Oisin Murphy's first classic victory on Kameko.

Already champion jockey, at 24 the Kerry man looks to be on the verge of a potentially era-defining career. The dangers of over-hyping precocity were underlined once again with Pinatubo's Guineas eclipse. There are even those who distrust Murphy's obvious intelligence and fluency, suspecting him perhaps of being just a bit smooth for his own good. But a quick straw poll of some in the game here who know such things came up with unanimous agreement that Murphy looks the real deal.

The young man has got talent, brains and, crucially, momentum. That momentum will inevitably stall at some point, whereupon some good old Kerry nous will probably be crucial to him backing his own flair. With Dettori in his 50th year, and Moore doggedly unprepared to accept the role, it is Murphy that looks to fit as the future face of racing.