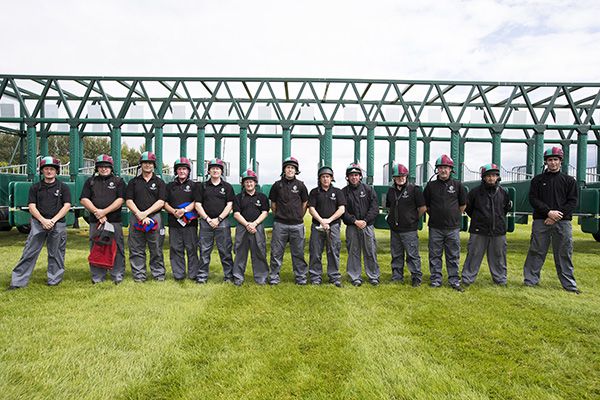 Racing had logic on its side when presenting the case to the National Public Health Emergency Team for a change of date under the government's Roadmap to Recovery. But politically logic's value can rise as well as fall. When a pandemic means even visiting elderly family members is frowned upon it can be a tough sell to push the case for what is essentially an entertainment industry no matter what the rationale.

That's the context in which the return to action will occur. So it's vital that ducks are got in a row over the next three weeks. Horse Racing Ireland's protocol document is a weighty beast that no one will mistake for light reading. No doubt some people will judge it has already served its purpose in having convinced the NPHET of its seriousness. But what it contains has to be implemented and be seen to be implemented.

There are elements of it that veer towards talking the talk rather than walking the walk. Stalls handlers for instance are going to have to be balletic if they're going to abide by the letter of some of it. The odd unruly mount simply won't play ball for long enough for the jockey to get on board without a leg up. Pulling up after a race can be far from straightforward enough to maintain strict distancing rules. But the spirit of these protocols are still important.

It's why whoever is appointed to patrol the protocols at racecourses should have the cushiest job of all in a few weeks time. There's been a lot invested by a lot of people both within and without racing to get this abridged form of the sport up and running. Everyone has a stake in making sure that investment pays off. So it really should be a far-fetched idea that anyone would be dumb enough to take liberties.

As for HRI's revamped fixture programme during the first three weeks of action, it looks an admirable attempt at improvisation in far from ideal circumstances.

Much of the flat pattern looks to revolve around maintaining the Derby on its original June 27 date. It means that Ireland's premier classic will now be the first of Europe's three major Derby races. As things stand it also makes it unlikely that horses will be able to run in both it and the Epsom Derby currently pencilled in to take place on July 4.

That's a pity. The impact of these dates on both races will be interesting. Perhaps just as interesting will be how Aidan O'Brien approaches the dilemma. Epsom and the Curragh have a major interest in any division of the Ballydoyle battalion. However keeping the Irish Derby on its original date looks pivotal to broader ambitions for keeping the rest of the season's pattern schedule as close to normal as possible. And it's not as if overseas considerations are influencing Royal Ascot going ahead on its original dates too.

Getting through an abnormal June looks key to returning to some form of normality from July onwards. If the consequence of that are a trio of Irish classics that are 'domestic only' then any ideas as to how to improve on that less than ideal scenario will no doubt be gratefully received at HRI headquarters.

What HRI has correctly done is row in with the French, and the British too, in prioritising the maintenance of prizemoney at lower and medium levels. Just how important prizemoney is to the priorities of any owner is a debatable subject. But up to 50 per cent cuts at Group One level looks to get the tone right.

Delaying the return of National Hunt racing by just two weeks rather than the originally projected four also looks reasonable. That first objective was predicated on the country's medical facilities being swamped in the Coronavirus emergency. Happily that hasn't happened so jockeys injured in falls shouldn't provoke anxiety about hospital resources being diverted to treat them.

It's hard to argue too with the decision to restrict racing to just nine tracks in the first three weeks of resuming. All racecourses are under pressure. But all of them have a stake in making sure that all goes smoothly during the resumption. Nothing is ideal in any of this. At every level it is anything but ideal. But the demand for a long time has been for clarity. That is now in place. Time then surely to kick on.

There's also potential opportunity in this scenario. For TV audiences starved of live sport for weeks the chance to watch live and meaningful competition should be attractive. It's been just a week since French racing returned but already there are people with only a fleeting interest in the gee-gees who've sampled the delights of Strasbourg and Compeigne.

Of course the difference is that Irish racing is parked behind Racing TV's subscription and the rules of the game will largely keep it there no matter what HRI might like. That's the problem with signing your own product away. But now could still be the time to get creative and hustle for the sort of 'morkoting' opportunities that might actually introduce the game to potential new audiences.

Finally, and separately, perhaps the most depressing line in recent days was William Hill reporting an inevitable fall in turnover but also consoling itself with how online sports betting had declined by less than anticipated as customers switched to alternative products such as table tennis and the more obscure football leagues.

There truly appears to be a large segment of the betting public out there that really will bet on anything. Now do they constitute actual sports fans or a social problem that ultimately represents a ticking time-bomb for the gambling industry as a whole?