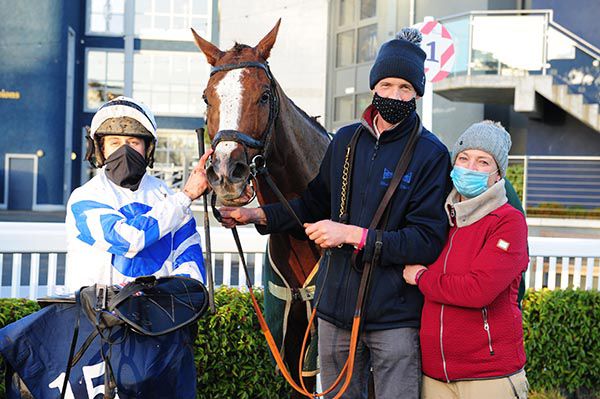 He is a big part of why I am training. We bought him in France as a yearling and he went to friends of ours, Liz and Matthieu Palussiere. He won a good hurdle race in Auteuil as a three-year-old but got injured twice.

He was in the field here for a year and we got him going and I just said we’d crack on and it’s been great. We’ve kept him right and he’s getting stronger now.

Apart from having him, I have been pre-training quite a few over the years, either those we own and bred here at Bluegate Stud by my partner Nicky Teehan, or horses we bought or the odd one that was given to us. We just didn’t have the gallops.

In the past we’ve had Shanahan’s Turn, who went on to win a Galway Plate, Poker Party, who won the Kerry National and Hogan’s Height, a Grand Sefton Chase winner, all of which we bred. Ten Year Ticket was another home-bred who we prepped before sending to Jim Bolger to train and he won in Nicky’s colours before being sold to Hong Kong.

Another we pre-trained and sold was Raya Time and we also do point-to-pointers. Kilbeg King won a maiden at Ballindenisk last November by eight lengths for Colin Bowe and was sold to Anthony Honeyball in England for £45,000.

I just thought as they were going on and doing well that I could training them having done the pre-training anyway.

We have three children now, Nancy, Robin and Nicky George, and I don’t really have the time to be competing at top level eventing anymore, which I did for so many years, including having the honour of representing Ireland at the Beijing Olympics with Watership Down in 2008. 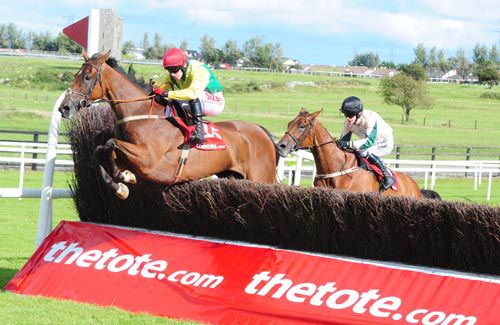 Nicky has a huge passion for racing too so we said we’d have a go. We put the gallops in which allowed me to take the horses further.

We still sell at the sales and the three-year-olds we don’t sell, we’ll crack on with. I have a few in here for a new client for pre-training and one for training and hopefully we’ll be able to attract more. It’s hard to break through but hopefully people can see that I can train racehorses.

There are 12 in work at the moment. Some of them are pre-trainers, some of them are training to race. They’re mainly my own horses but we’re open for business, if there are any owners that want to send us horses. The last few weeks people have been in touch, more for the pre-training side but when you’ve had a few winners, the belief grows.

Apart from Epson Du Chenet, we have Pottlerath, who is in work but has to wait for better ground. We have a horse we’re trying to aim for the Land Rover Bumper at Fairyhouse. His name is Kells Priory. I like him. He’s taking the work okay so far.

All of them are trained like eventers, even starting in pre-training. They have to go well on the flat, they have to be on the correct leg, they do loads of poll work and gridwork. They must jump in a shape, canter left, canter right. Then they go on the gallops.

Every morning before they go in the gallops, they go in the arena, to do some jumping and a bit of poll work. And I think that helps. They can do it properly but it settles them as well. They’re not just going out to get galloped. Their brains are focused on settling, then the gallop and then they go down to the river and the field to play and cool off. It’s good for their minds.

I do think there is an advantage in having a smaller yard where you can give each horse individual attention. Some need that more than others and there may be horses in busier yards that would benefit from it.

Each horse here has their own saddle pad to fit the shape of their back, they have their own bridle. I experiment with bits to get the right balance and use massage rugs to help their muscles recover. We turn out for every horse. It's very individual here and I think that’s important, as every horse’s mind is different.

Epson Du Chenet has just turned seven so hopefully there is more to come. Nicky does the race planning and I focus on getting them fit and ready. I am learning as we go as well. Epson Du Chenet wasn’t fit enough to begin with in Killarney. He’s getting fitter and getting better with the races.

We have a two-and-a-half-furlong gallop now. It’s fairly deep. We’re a bit careful when we go away, but he’s gotten strong and hardened up. Compared to the first time we ran him, when he was fairly sore for a weak after, he was as fresh as a daisy after Monday. He’ll run on anything but it’s better for him to have a bit of soft ground. But you don’t want to be running on bottomless ground either.

Hopefully he can provide a few more good days and do the talking for us, convince owners that we might be worth sending a horse to for that individual attention. It is a partnership between Nicky and I, I couldn’t do it without him and I suppose our skills complement each other.

Certainly, this is something we want to have a real crack at. It’s a competitive environment but we can’t complain with how we’ve started anyway. Hopefully there’s more to come.