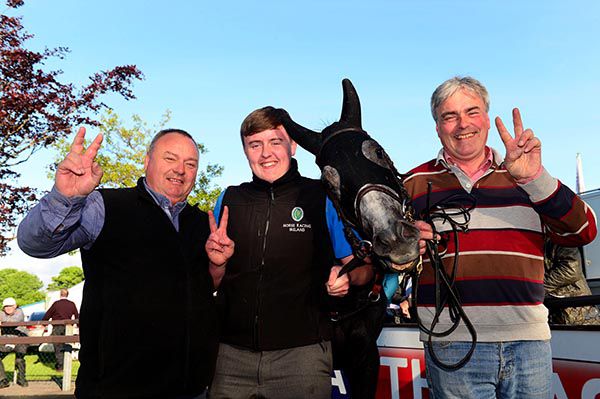 We are riding around 17 or 18 at the moment. The majority them are our own but we still have horses for other people too.

Everything we have is ready to go and they have been from the start of the season. That is another reason we need that clarity. If it was going to the be the 29th of June, I could have worked to that. We know it’s hard but we have been dragged along from the 19th of April. That was the start back date we were supposed to have first. Then we get the 5th of May and then we are talking about the 18th and then we are getting a real slap and going to the 29th of June. It is about time the government and minister tell us a little bit earlier and be a bit more up front.

We normally campaign our horses early to try get some wins before the big guns are out, and maybe sell a few on. We have a win, two thirds and a fourth from four runners before everything came to a stop. Then we were told the races had to close down but that we would be back on the 19th of April. So we kept our horses in training, ticking along. And we have kept doing that.

It is at a stage now that we are wondering if we are going to miss the season. Yet the horses have been in full training. Some of my owners have stayed with me. They are fed up that the thing is being drawn out and drawn out and drawn out. Their horses are fit, they were budgeting to be going early. The last slap in the face was outrageous. That is a real disaster.

We are mostly a family-run operation but we have a couple of outside lads for riding out, Kevin Smith and Tony Murray, because most of us are too big to ride. My nephew, Jamie O’Sullivan is the exception to that rule and is a great help riding out.

We do a lot of the work ourselves, including transport on race days. It started with my father Larry breeding and we have three Larrys involved now, with my brother and son as well. We are still breeding a lot of mares, around 10 or 12. We cover them mostly with Tough As Nails, who raced for us and won a two-year-old maiden before finishing third in the Group 1 Phoenix Stakes. He was also placed at Group 2 and Listed level. So we stood him as a stallion. He is after moving to Peter Maher’s Ashfield Stud now and is standing there since April.

Tough As Nails is a very good stallion, a son of Dark Angel. He is not overused as we were the only ones who used him before he went to Ashfield. He is improving the mares and producing nice, winning offspring. He will cover our mares and then we would buy an odd horse, here and there as well. We would try and buy something cheap and sell it on with form.

Of those we breed, we race the mares and breed from those that have won. We will sell the colts if we can, either through the ring or the track. That is another reason we need to get back racing, the business side of it.

The family involvement gives you more enjoyment. The only downside is there is a lot of arguing! But the bottom line of it is we are all working towards the one direction. Improve the thing and keep it going. When we started off we were just coming out of the recession. We have been trying to improve a bit every year. Trying to improve the quality of our horses and get more winners every year. We have been doing okay, slowly but surely.

We trained our first winner on the flat in 2007 and have had a winner every year since. On The Go Again is one our best known horses to date. He won the Irish Lincoln two years ago and followed up with the Listed Heritage Stakes. In all, he won eight times, including a Grade B hurdle and accumulated nearly €200,000 in prizemoney. The last two seasons have been our most fruitful in terms of winners and it would have been nice to try to build on that.

We had hit the ground running. We won the handicap the first day of the season at Naas. We were first and third in that. We had our team in great form. It is a shame but these things happen. There is not a lot we can do about it. It is outside our jurisdiction and our control. You can only play the hand you are dealt with but I thought this year we had a nice bunch of horses.

In From The Cold won the Madrid Handicap at Naas with The King Of Kells third. They are both nice colts. I think In From The Cold is getting stronger all the time. He is getting more mature. I would say he will stay a bit further and there’s more to come.

I also have a sneaky feeling for a horse called Comfort Line. He is going the right way. He could be a very nice horse towards the back end of this year. He is showing it anyway.

Hopefully there is racing for him and all the rest of them but either way, we need to get that message soon.