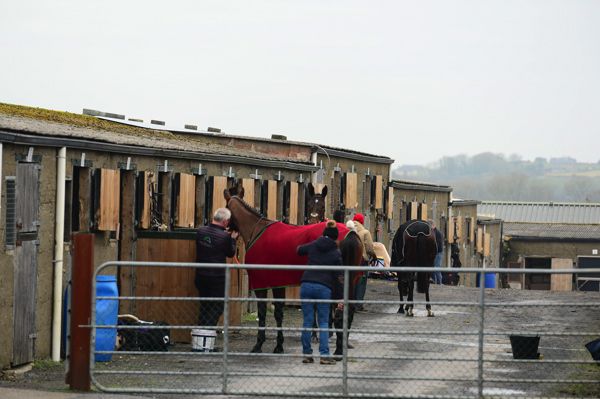 The case itself is set to rumble on for several more weeks, if not months, as Charles Byrnes has lodged an appeal against the suspension of his licence, but it is the wider exposure this has garnered, among two high profile journalists in particular, that must be causing the sport’s administrators and regulators the greatest headache.

Two men with track records for exposing cheating in sport, Paul Kimmage (Sunday Independent) and David Walsh (The Times), both wrote extensive articles over the weekend with a similar thrust — to paraphrase - that racing is a hot-bed of corruption and that the authorities are effectively turning a blind eye.

Both journalists dragged up old cases to support their arguments, but my overall sense is that they are just on fishing expeditions and have no hard facts relating to anything new.

Philip Fenton and Foxrock’s shoes got the obligatory airings and the only real surprise was that they didn’t throw in a few pars about Yellow Sam and Gay Future while they were at it.

Every Sport has its dirty linen and when you put it all on the washing line at the same time it paints a poor picture. Racing, because of its close links to gambling, probably has more dirty linen than most and in truth the authorities policing the sport always seem to be playing catch up.

Perhaps messrs Kimmage and Walsh have a smoking gun they are about to reveal. Perhaps it is related to Jim Bolger’s recent statement regarding drugs in the sport, but until such time as someone comes along and states publicly what they know we are just dealing with the usual rumour mill which is filled with conspiracy theorists and hard luck stories.

I have been getting similar letters and messages for twenty years, but it means nothing. One particular guy messages our Facebook page every time an odds-on shot gets beat in Ireland. “Vincent, please take a look at 4.45 Bellewstown yesterday, if that’s not cheating what is?” “Vincent, Why is Irish racing so bent? The 4.40 today the favourite drifted from 1/4 to 4/9 and last two races it front ran. Today never tried to lead. As F**king bent a race as you are likely to see.” These are generally punters venting their anger when they lose a few quid.

The game is not 100% straight, it never has been and as long as it is structured around a handicapping system it never will be.

The strange thing is most punters seem to like it that way. They revere the likes of Charles Byrnes, JP McManus, Barney Curley and Mark Prescott when they land a touch.

There is nothing a punter likes more than reading about someone getting one over on the bookies. The problem is that you can only pull the wool over the eyes of the bookie if you have been disguising the horse’s ability beforehand.

Wrong trip, wrong ground, wrong jockey, wrong headgear, there are dozens of tricks used to mask the true ability of these “stroke horses” before their day in the sun.

Part of the appeal of horse racing betting is working out which horses are fancied, and which are not. It equates in some ways to cycling where those that study that sport would tell you the riders that have no chance in time-trials or mountain stages but excel in sprint finishes.

The Tramore case of Viking Hoard is altogether different and far more alarming. Doping horses is simply unacceptable. The fact that the dopers in this case have got away scot-free exposes a major flaw in the policing of the sport. We are being told that this case is a one-off but how can we believe that if the perpetrators were never caught.

A two-year investigation couldn’t pin the blame on anyone. Instead the IHRB sanctioned Charles Byrnes on a technicality — he left his horse unattended in the stable yard for 25 mins.

Leaving horses unattended in the stable yards is an everyday occurrence. The IHRB know this.

Their Rule book states: “The stewards view with concern the fact that horses are left unattended in Racecourse stable yard areas.”

So, if the IHRB knows it’s a problem why have they not sanctioned others over this offence? And, is the sanction of a six-month suspension of a trainer’s licence an appropriate penalty? It appears this penalty is linked to the fact that the horse turned out to be nobbled.

CCTV could have produced a different outcome in the Viking Hoard case and racecourses are now offering excuses as to why such a vital tool in the policing of stable yards is currently only fully operational at Leopardstown. Maybe I am missing something, but hearing costs of up to €20,000 per racecourse to install such equipment seems exorbitant. A friend, with a business in Cork city, installed a three-camera system in his extensive yard as recently as last Saturday for a total outlay of €600.

Maybe the guy from the far east that laid Viking Hoard would be better off going into the CCTV installation business, it appears more lucrative.