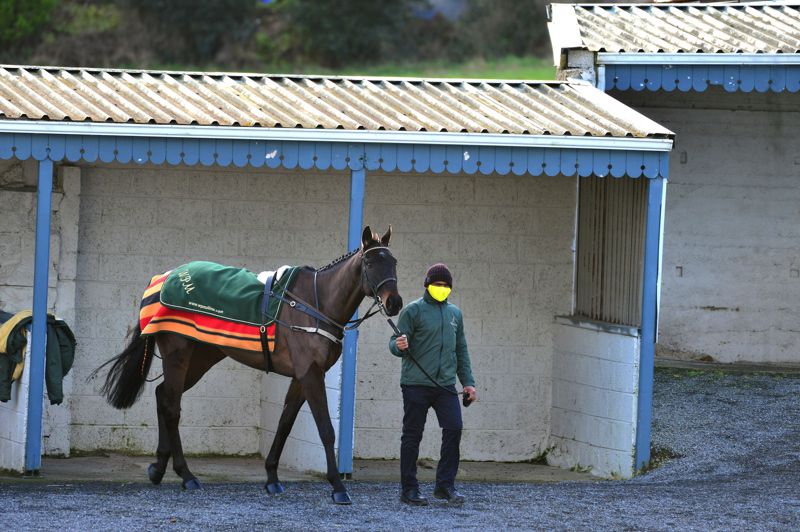 Al Boum Photo in the stable yard at Tramore. He is one of 17 Irish trained horses entered in Gold Cup
© Photo Healy Racing

Yesterday’s news that horse racing and other elite sports are allowed to continue during this latest lockdown is obviously a boost for everyone who’s livelihood is linked to racing but now is not the best time to have 500 or more people travelling up and down the country on a daily basis attending race meetings.

On a personal level I can honestly say that prior to Christmas I only knew two close friends that had tested positive for Covid, and both of them live in the UK. In the last two weeks alone, I have had news of five more including two relatives. A disease that seemed for many months to be an inconvenience is now a real and present danger for everyone.

The Covid protocols put in place by HRI and the IRHB on race days have worked well up to now and hopefully they will continue to do so but there is a niggling feeling we have entered a new stage in the battle and face coverings and two metre distancing may not quite cut it anymore.

The IHRB is having a couple of bad weeks on the PR front and will probably welcome a bit of a break too.

Denis Egan’s defence of inconsistent Cobalt sanctions imposed against trainers on RTE TV did little more than expose the flaws in the IHRB’s strategy to release as little information as possible with regard to these cases.

Then we had the issue of the incorrect race distance for Al Boum Photo’s comeback win at Tramore. Attheraces sectional timing boffin Simon Rowlands figured out that the horses covered in excess of a furlong more than the official race distance. Again, the IHRB looked less than professional, both in it’s methodology for determining the race distances, and in trying to defend itself by citing the word ‘about’ which is used to preface all race distances.

Their use of the word ‘about’ in race distances is as an adverb to indicate approximation but, in this day and age, it’s simply a cop out.

Not too long ago I queried the fines they had imposed on three individuals for Covid protocol breaches. A stable lass who had deliberately broken the rules was fined €150 while trainers Aidan and Donnacha O’Brien, who had inadvertently done so, were each fined €2,500.

The answer was that the Referral’s Panel had determined the scale of the fines ‘on a proportionate basis.’ I’m still not quite sure what exactly that means but I presume it is in some way based on their ability to pay. That being the case, surely Donnacha’s €2,500 is ‘proportionately’ far greater than Aidan’s.

This week saw the first of the entries revealed for the Cheltenham Festival and with only two months to go to the big event it is impossible to know quite what to expect. It must now be long odds against the public being permitted to attend but it’s also no certainty at this stage that Irish-based horses and jockeys will be allowed compete.

It would seem plausible that those already vaccinated could be allowed to travel. Obviously, this currently presents a problem for Ireland as the rollout of the various vaccines has barely started here and is unlikely to be far advanced by early March.

While Cheltenham is pivotal in so many ways for the wider horse industry it would be unimaginable to see Government prioritise racing’s participants to be vaccinated ahead of frontline workers and the most vulnerable.

A Cheltenham Festival without the Irish element would have been unthinkable previously but at this stage it would be a better prospect than no Cheltenham at all.

The uncertainty around Cheltenham certainly enhances the appeal of the Dublin Racing Festival at Leopardstown next month when we are likely to see some of the best domestic action staged on this island. Let’s hope the weather can play its part again and provides some decent ground.