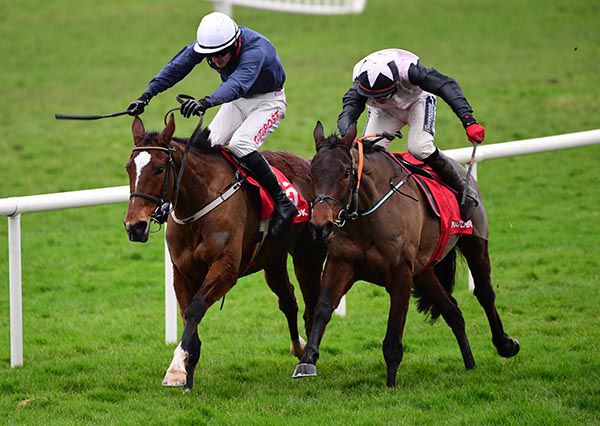 The Willie Mullins-trained mare was headed two out, but the 5-1 chance fought back gallantly to deny Gordon Elliott’s Pencilfulloflead by half a length in the Grade One feature.

The winner’s stablemate Asterion Forlonge was the 4-6 favourite, but blundered and exited the race five fences from home — one of two fallers among the five who set out.

Colreevy was taking her chasing record to two from two, and winning rider Danny Mullins said: “It was a good performance. She was always very good to jump at home from day one, and the aim today was a clear round and hopefully we’d be in the mix down over the last two.

“I knew she’d keep galloping — she is very tough, not fast — and once Paul (Townend, on Asterion Forlonge) fell, it opened things up.

“But it still wasn’t going to be easy from there — when the other horse (Pencilfulloflead) joined her it definitely helped.

“There is a good programme for mares nowadays, and the Flynns (owners) will be delighted because they will probably breed from her and she is now a Grade One winner in bumpers and over fences.”

The Irish Horseracing Regulatory Board Veterinary Officer reported to the Stewards that Asterion Forlonge (FR) trained by W.P. Mullins was found to have blood at the nostrils post race, probably as a result of a fall.