A Step Too Far completes five-timer in feature 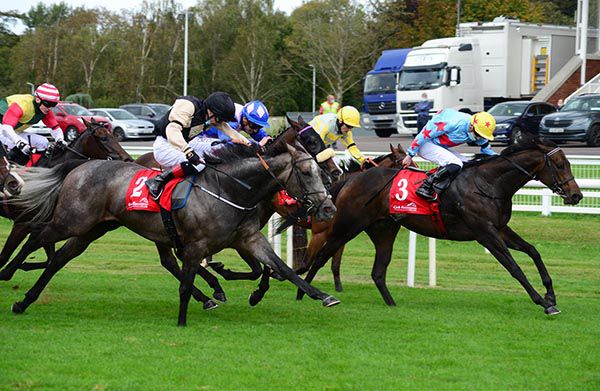 A Step Too Far (No.3) makes it five wins in a row
© Photo Healy Racing

A Step Too Far continued her amazing progression in sprint handicaps this season by landing her fifth successive race in the featured Irish Stallion Farms EBF Fillies Handicap at Cork.

Kieran Cotter’s charge was beaten off a mark of 48 back in June but has now won all five starts since and a rating of 82 couldn’t stop her here at odds of 9/2.

Her previous four wins all came over the minimum trip and she showed great battling qualities here over six furlongs digging deep for Adam Farragher in the closing stages to get the better of Goodnight Girl.

The winning margin was a neck, with Windham Belle also running a cracker just a head further away in third.

Allez Sophia was the big market mover with earlier quotes of 9/1 trimmed right down to 9/4 favourite by the off.

The Paddy Twomey-trained three-year-old looked a big threat on the stands’ side a furlong out but couldn’t find any extra in the closing stages and was beaten just over a length in fifth.

Cotter said, "Five-in-a-row, not even the great Kerry team did that!

"She has been unbelievable and we thought we were near the bottom of the well today but she ground it out and I still can't believe it.

"I thought Adam gave her an unbelievable ride, she relaxed under him and when they headed her, he didn't go for her until he really had to. It was a super ride and she is a super horse.

"I was in Dundalk when she first ran at Dundalk and finished fourth and the horses around her were all rated in the 80s. Things didn't work out for her after that and maybe a change of yard has helped her come back to herself.

"Usually we get a horse and try to get them to adapt to our way of training but we had to adapt to her and have found the key to her now.

"I don't know how far she can go but long-term we're looking at next year with her. We'll give her an entry in the Joe McGrath Handicap in ten days time and will see."