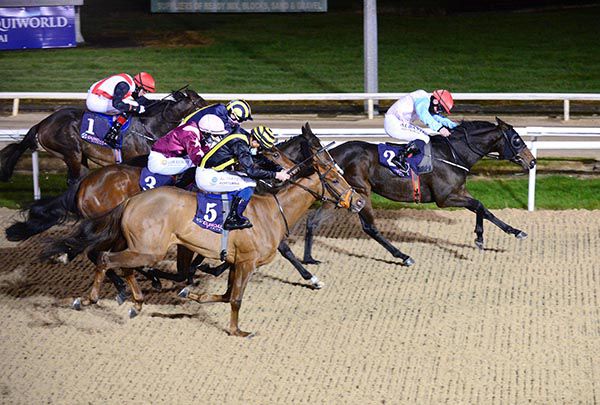 Back to seven furlongs from a mile, Gary Carroll was aboard the Ringfort Stud owned and bred Style Vendome filly.

She chased the leaders on the inner, and was pushed along to lead a furlong and a half out.

Sheila Lavery’s winner was soon ridden, and strongly pressed close home she was all out to contain Taylored by a neck.

“I'm delighted with that, this race just came into the program last minute,” said the successful handler.

“It was the only nursery left for her so I talked to Derek (Veitch, owner) and we took our chance but I think she's better over a mile.

“The race was there so we had to go for it. We had picked out a race in December, a winner of one, but she doesn't qualify now.

“I'll talk to Derek but I'd say there is a good chance she'll have a break now because there is nothing more for her.

“Gary said I would have shot him if he was beaten as he was there just a bit too soon. She was a little bit lonely in front but thank goodness the line came.

“I think there is a lot more engine in there and she just needed to be towed into the race a bit more.”

C.D. Hayes, rider of Catherine Chroi trained by Gordon Elliott, reported to the Clerk of Scales that his mount got a bump early on.