Across the card double for Joseph O'Brien 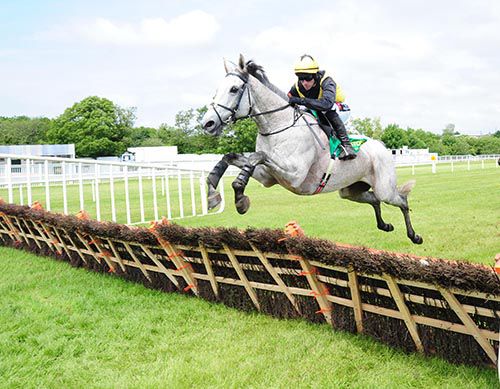 Less than an hour after recording his first winner with Justice Frederick at Gowran, Joseph O'Brien completed an across the card double, as his Mai Fitzs Jack made all to win the John B. Keane Maiden Hurdle.

An unlucky second on his hurdling debut at Tipperary last month, the seven-year-old son of Acambaro was sent off the 4/9 favourite this afternoon.

Sent straight to the front by Brian O'Connell, who was completing a quick opening race double, he stretched clear on the approach to the straight, and eased to a ten length success.

Pat Kelly trained the second and third, Licklighter (50/1) and Kansas Kid (50/1), and there was eight and a half lengths between them.

Aidan O'Brien, father of the winning handler, said afterwards: "Straightaway I got put in my place!

"It was great in Gowran and our own horse (runner-up Leo Minor) maybe got a little tired and I underestimated the strength of Joseph's horse obviously.

"His (Joseph's winner Justice Frederick) first run was over five and he is a horse that will get seven and further.

"This horse (Mai Fitzs Jack) was unlucky the last day when he made a mistake at the last two and I think the winner was a decent horse.

"I'm not sure but I'd imagine he'll (Joseph) keep him busy over the summer.

"It's a massive day for us and it's great to get a win both jump and flat.

"Joseph loves it (training) - he loved riding but it was tough for him for a long time (with weight) - doing nine stone every morning was very hard.

"No one will get more pleasure than me but I'll have to keep my eye on the ball now!"

Mai Fitzs Jack won two point-to-point's for Mary Louise Hallahan and he went unsold at 26,000 pounds at Brightwells in December of 2014.