Arctic Fire rolls back the years 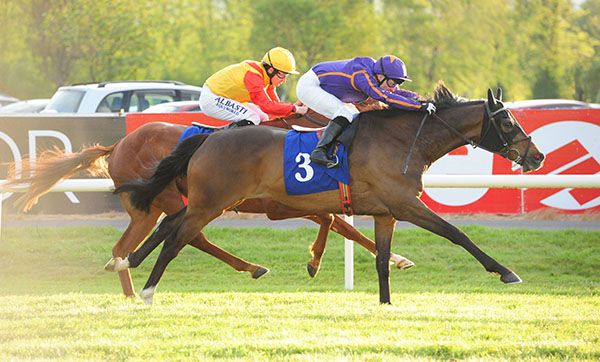 Five years after being beaten by a nose in this race, Arctic Fire swept through to win the Betvictor Race by half a length.

The 10-year-old, and former Grade One Hatton's Grace Hurdle winner, took the honours for Denis Cullen and Mark Gallagher in this mile and six contest.

He outgunned nicely-backed Persian Lion (7/2 to 5/2) by half a length.

This was his first win on the Flat. He won six times over hurdles including at Grade Two and Grade Three level and was runner-up to Faugheen in the Champion Hurdle of 2015.

Denis Cullen said: “I'm delighted. I had him in yesterday in the two-and-a-half mile hurdle and I swerved that to come for this.

“After he fell the last day in Cork I thought he'd enjoy himself tipping around here.

“Five years ago he ran in this race and he got beaten a nose. So to come back five years on and get the win is great for a ten-year-old horse.

“He still shows an awful lot of his enthusiasm and he loves the job.

“I'll have a chat with Mr Peacock and see what we do. He's qualified now for those premier handicaps as you have to had a run on the Flat within the last 18 months. He kind of needed to run here today.

“We'll have a look and see how he is. He was retired last year, came back and won over hurdles and I think he'll win over fences when he gets conditions right for him.

“He's won on the Flat and he can tip away so we'll see. The horses welfare always came first and as long as he was enjoying and running well we'd keep going.

“He does enjoy his work and he's sound, fit and well so we'll see where we go. We have plenty of options now.”