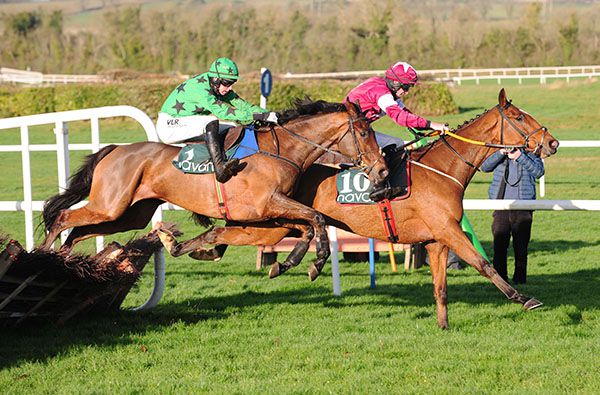 Ashdale Bob, near side, comes to collar Wide Receiver on the run-in
© Photo Healy Racing

Jessica Harrington's Ashdale Bob came home best to land the opening two and a half mile maiden hurdle at Navan.

The 5/1 shot raced in third throughout before travelling well to deliver his challenge to Wide Receiver at the penultimate flight.

He clipped the top of that hurdle as Wide Receiver got away from it the better but he was almost on terms again at the last.

Wide Receiver fiddled his way through it and Ashdale Bob got his head in front in the final 150 yards.

He was kept up to his work by Paddy Kennedy to increase the margin to a length over the 5/6 favourite. Shadow Rider was gambled on from 10/3 to 2/1 but finished two and a half lengths further away in third.

“He was tough. He'll come on from that run as well as it was his first of the season,” said Kennedy.

“He was entitled to do that on some of his runs last year. His last run was disappointing but he'd just gone a bit weak.

“He has strengthened up well and he's a nice horse going forward.

“He jumps very well, he's a chaser in the making and whatever he does over hurdles is a bonus.”

This was Kennedy's 10th winner of the season.