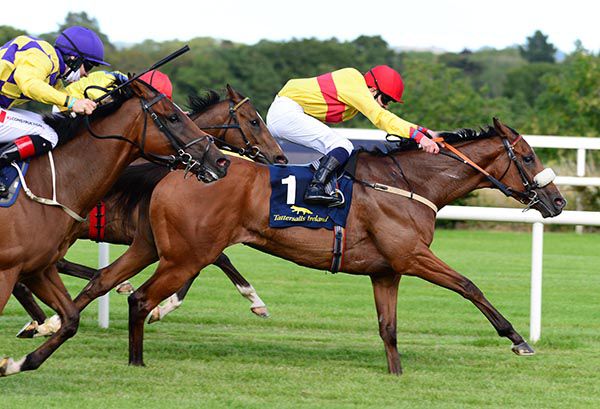 Successful at Dundalk in January and Gowran last month, he since ran with great credit to finish sixth in the Listed Celebration Stakes at the Curragh.

Upped fifteen pounds for that effort, the son of Thewayyouare was lumbered with top-weight today, but was helped by Luke McAteer's seven pound claim.

Sent off at 20/1, the five-year-old gelding was settled in mid-division. He was ridden and squeezed for room from the two furlong pole, but was soon switched to the outer.

The runner-up was returned the 2/1 favourite under Colin Keane for Ger Lyons, while the front-running Geological (40/1) finished a gallant third with Gavin Ryan aboard.

Winning trainer Barry Fitzgerald said afterwards: "I only took out a licence last July and have nine in training, both for the Flat and over jumps, at Old Leighlin in Carlow.

"It was my fault I ran him in bumpers. He didn't stay but he's a fine big horse and clicked when we dropped him back to seven.

"I always said he'd be a fine horse when he filled out and it's taken him until now to get where he is.

"I felt he had an each-way chance. The ground was nice for him and it worked out perfect. Luke gave him a lovely ride and kept perfectly to instructions. He ran through the line which I liked."

D.P. McDonogh, rider of Dark Vader trained by Joseph Patrick O'Brien, reported to the Clerk of Scales that his mount got tight for room in the straight.

S. Foley, rider of Parkers Hill trained by Leanne Breen, reported to the Clerk of Scales that his mount ran very free early on.