Bailly lands a gamble in the opener at Bellewstown 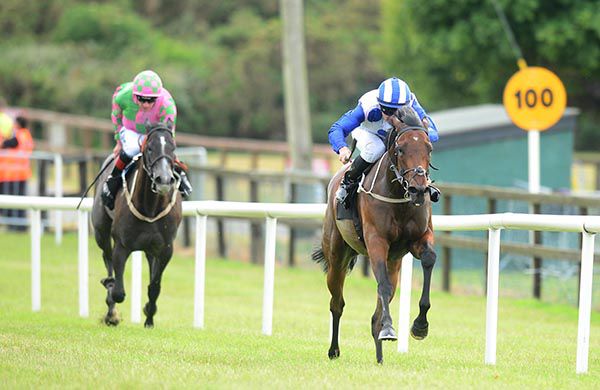 Bailly landed a gamble in the opener at Bellewstown, the Irish Stallion Farms EBF Maiden, scoring easily under Gary Carroll for Ger Lyons.

Fifth of seven on debut at the Curragh last month, the daughter of Charm Spirit was available at 8/1 in early shows for this five furlong contest.

She opened on-course at just 7/2, before going off a 9/4 chance for owners David Spratt and Sean Jones.

Settled behind the leaders on the outer, she was ridden to lead over a furlong out, and soon stretched clear, going on to prevail by four and a half lengths.

Sundance Star (8/1) finished second under Ronan Whelan for Ken Condon, while the 5/4 favourite Isle Of Innisfree was a very disappointing fifth.

"I thought that was impressive for five furlongs around here," said Lyons.

"Colin (Keane) deserves a lot of credit as he rides her every day. She's not easy and is more mentally not there than anything else.

"I didn't think she'd have the speed that Colin always said she had. I think our fillies are better than our colts and she was always in my top batch of them.

"We used the Curragh, without the Curragh she wouldn't have won here. She's a long way from being the finished article.

"We'll see how she comes out of that. We'll do her like we did Blue Uluru, we'll let her build up slowly and she could be a cracking filly next year with plenty of speed.

"I hope Colin has a winner down in Tipperary because he deserves full credit, but in saying that Gary does a lot of work for him at home as well so it's swings and roundabouts.

"I'm delighted to win with her on her second start. She's after doing everything right there. Gary said he thought he was in trouble as they were going some speed and then she went away and won four-and-a-half lengths.

"I think she's as good as we thought she was but only time will prove it.

"There is nothing wrong with coming here and winning but you need experience to do that and she learned enough the first day to do that."

The winner was bought for 100,000 guineas as a yearling, and is a half-sister to Listed winner Mabait.