Ballinrobe feature all about Haarth 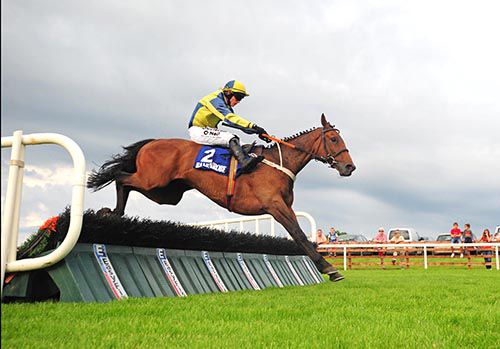 "He's a grand little lad and the man on top (Paul Townend) knew him well today. He really thought he would do the business and the extra furlong was no harm," summed up trainer Des McDonogh after his Little Haarth (9/2) took the feature race of the evening at Ballinrobe, the McGrath Limestone Works Ltd. Handicap Hurdle.

Little Haarth was second behind Heist at Bellewstown 19 days back, Stay With It was fourth. This time the latter was third but Little Haarth stepped up well to come home in front by nine lengths from Round Tower.

"He ran a great race in Bellewstown and he might go to Ballybrit for a bit of sea air," added McDonogh.

"There is a two-and-a-half mile and a two-mile five. The race on the Saturday is an €80,000 race but we can afford the entry now!"

The Stewards fined Gavin Cromwell, trainer, €350 for lodging a passport in respect of Glenwood Star, in which the vaccinations did not conform with the provisions of Rule 91. The Stewards allowed the horse to run on receipt of the trainer's written assurance that the vaccinations were in order.

D.E. Mullins, rider of Reafadda, trained by John Patrick Ryan, reported to the Stewards' Secretaries that his mount suffered an injury before the last hurdle but he was unable to pull him up.

The Turf Club Veterinary Officer examined Reafadda, trained by John Patrick Ryan, at the request of the Stewards and reported the animal to be lame post race.

Ten entered for next week's Dante at York

Sir Michael Stoute’s unbeaten colt Highest Ground is among 10 entries for the Al Basti Equiworld Dubai Dante Stakes next Thursday, as York prepares for its first meeting of 2020 — eight weeks later than scheduled due to the coronavirus pandemic.