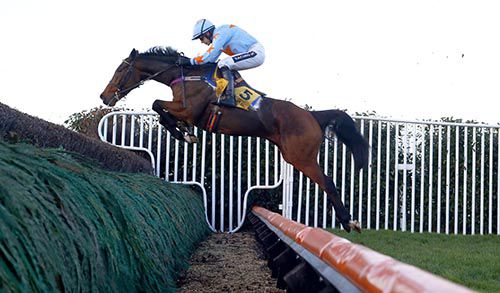 Altior may only be facing three rivals in the Betfair Tingle Creek Chase at Sandown, but there is a case to suggest it is his toughest test to date.

Nicky Henderson’s star is arguably the biggest draw in National Hunt Racing right now, with an unbeaten run that stretches back to the Punchestown Festival of 2015 in a bumper.

He was due to make his comeback in this race 12 months ago only for a setback ruled him out — but everything has gone to plan this time, and it is a good job because he faces Un De Sceaux, Saint Calvados and Sceau Royal.

“Altior is in very good form, and we are looking forward to Saturday,” said Henderson.

“We contemplated running in the Shloer Chase at Cheltenham last month, but we were happy to wait for the Tingle Creek — and he is in good order.

“It is shaping up to be a very good race, but we are delighted with him.

“With Buveur D’Air winning at Newcastle on Saturday, it was nice to get the show back on the road after Might Bite got beat at Haydock.

“We are looking forward to the race.”

Un De Sceaux may be rising 11 but Willie Mullins’ veteran has set the standard in this division for some time, winning this race a couple of years ago.

A real mudlark, the ground can not be soft enough for him — so any rain that falls will be in his favour.

“Beating Un De Sceaux at Cheltenham in March is one thing, but beating him in deep ground at Sandown is another,” said part-owner Colm O’Connell.

“If we’re ever going to beat Altior, we know the conditions we need. Obviously there’s Sceau Royal and Saint Calvados as well — that’s what makes it so exciting.

“If you look at the horses who have been second and third to him, a fair few are on the scrapheap.

“Age is but a number, and we’re all getting old. He was foaled in May, so technically he’s not 11 until May — but it’s a bad sign when an owner is dealing in months!

“This race is exciting and good for racing — people don’t want to see 1-5 shots in Grade Ones. Because of the fast ground, we seem to have seen the best horses take each other on earlier this season — look at the Betfair Chase and the Fighting Fifth. The Tingle Creek looks another cracker.”

Alan King’s Sceau Royal was a winner on this card last year in the Henry VIII Novices’ Chase, but he was forced to miss the Arkle with a problem. He showed he was over that when returning with a stylish victory in the Shloer Chase last month.

“I’m delighted with him. He worked on Wednesday morning and schooled on Monday, and we’re very happy,” said King.

“I’m under no illusions about the task in front of us. It’s a huge task, taking on Altior and the others as well — it looks like it’s going to be a great race.

“We were thrilled with him at Cheltenham, and obviously that was his first run since January.

“We don’t have to make the running and we are very happy with where we are with Saint Calvados,” said Whittington.

“Everything has gone according to plan, and it’s very exciting to be taking part in a race like this. We’re under no illusions how hard it is going to be to beat Altior and the other two, but he deserves his chance.

“There’ll be plenty of pace on, with us and Un De Sceaux, and it could come down to who jumps the Railway Fences the best. Our lad is a very slick jumper, and he’s still only five.

“The Arkle has been his only blip, and we can put a line through that now after what he did in Ireland. But he’s in with the big boys now — arguably one of the greatest we’ve seen over two miles — so we’re just pinching ourselves.

“If he’s competitive and comes back in one piece, we’ll be happy because it’s a tall ask for anyone to beat Altior.

“It looks an outstanding Tingle Creek, and we’ll have to improve to be competitive — and even more to win it — but we’re excited about being in it.”