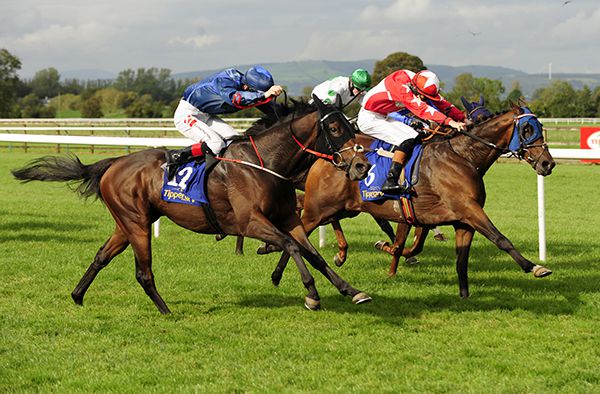 Blackstone Cliff, near side, cuts them down
© Photo Healy Racing

This was the first time that a tongue-strap had been deployed with the hood.

The winner was returned at 7/2 from 5/1 and won by half a length. Tennessee Wildcat got a runner-up prize at 14/1 and was half a length in front of All The Mollies (8/1).

John McConnell said: "The owner James Wallace is a very nice man who has been patient with me making a mess of things! He was unlucky at Down Royal and then I stretched him stamina-wise at Leopardstown and the ground was very soft at Cork the last day, and he loves this ground.

"I was humming and hawing whether to run him as he didn't do a great piece of work during the week, but when you have Colin on your side it is a great help.

"He stays 1m2f, is big enough to jump hurdles and when we got him he was quite keen and he could possibly make a nice summer hurdler next year."