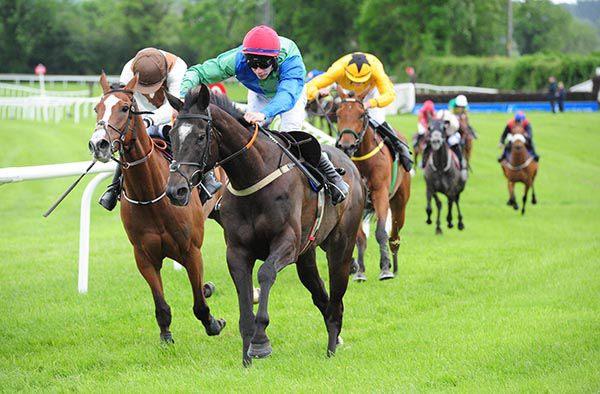 Paddy Buns was a shock winner of the opener at Kilbeggan this afternoon, the Adare Manor Opportunity Maiden Hurdle.

The son of Arakan was making his debut for Paul Gilligan this afternoon, while it was also his first start on the racecourse proper.

Previously trained by Donie Hassett, the five-year-old was second in a point-to-point at Loughrea last month, and was sent off an unconsidered 50/1 chance this afternoon.

Ridden by Kevin Brouder, deputising for the injured Evan Daly, the brown victor was settled in mid-division on the outer, and was seventh with a circuit to race.

He was pushed along from two out and was ridden to go second before the last, keeping on best on the run-in, getting up to score by three parts of a length.

Bachelor (8/1) had to settle for second under Donal McInerney for Noel Kelly, while Union Gap, who was returned the 4/5 favourite, was another three and a quarter lengths back in third.

Gilligan said afterwards: "We only bought him two weeks ago out of a point-to-point and Derek O'Connor recommended him to us. We said we'd tip around here and see what would happen.

"It's a pity that Liam (son) is not riding him as he dislocated a shoulder at Fontwell last Sunday, and then Evan Daly was to ride him and unfortunately he broke his collarbone on Friday night.

"I don't know where he will go next but he's after winning and paid for himself."