Cawley and Gilligan strike with Whatsafellatodo 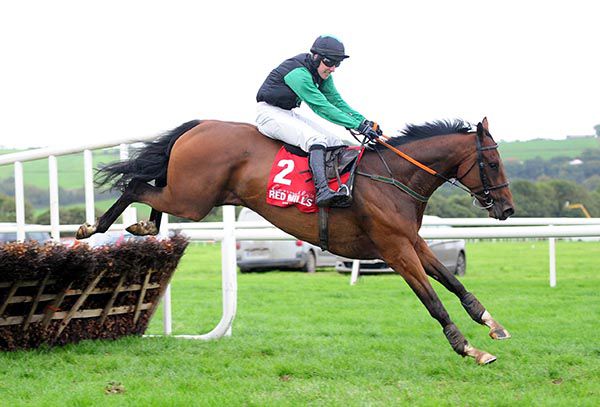 Whatsafellatodo made the breakthrough on his third start over flights, as he took the Connolly's Red Mills Irish EBF Auction Maiden Hurdle.

Fifth on his debut over flights at Cork in July, he was second on his most recent outing at Kilbeggan, going down by just three parts of a length to Falak when sent off at 50/1.

Available at 15/2 in early shows, the son of Beneficial opened on-course at 11/2, before going off a well-backed 9/2 chance under Liam Gilligan.

Settled in mid-division, the Brian Cawley trained victor took closer order from three out and led at the next.

He soon eased a few lengths clear, and kept on well under pressure on the run-in, going on to score by a length and a half.

The 5/2 favourite Court Maid kept on well from the last, but couldn't peg back the winner, and had to settle for second under David Mullins for his father Tom.

The Joseph O'Brien trained Vinnie The Hoddie (5/1) was another length and three parts back in third, with Mark Walsh aboard this one for Joseph O'Brien.

Cawley said afterwards: "He had a good run the last day and it made a man of him because he lugged in behind Gordon's horse and today Liam made use of him and sent him on and he was good and straight on the run-in.

"We'll talk to Jody (Daniels, owner) and see what the plan is now.

"We moved yard in March and that's three winners on the track now. We have 10 in and have a couple of babies so it will be Christmas time before we're properly up and going."

* The Irish Horseracing Regulatory Board Veterinary Officer examined Frankly All Talk, at the request of trainer, R. K. Watson, and reported the animal to be blowing hard post race.