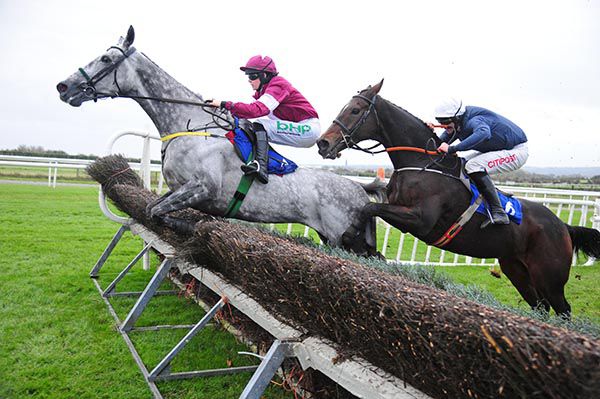 Clara Sorrento put some disappointing recent efforts well-behind him, as he took the Sky Sports Racing Launching In 2019 Beginners Chase, completing a double on the card for trainer Noel Meade.

A smart performer over flights, the grey French bred could only manage fourth when sent off favourite on his chasing debut at Wexford in July.

He again finished a well-beaten fourth on his most recent effort at Kilbeggan, and was sent off at 4/1 today with Rachael Blackmore in the saddle.

Soon in front, the seven-year-old victor was joined by Gusty Rocky approaching the third last.

He was ridden and regained the lead at the final fence, keeping on well from there to score by a length and a quarter in the colours of Gigginstown House Stud.

Gusty Rocky (5/2), who travelled best from three out, had to settle for second under Davy Russell for Pat Flynn, while Rueben James (10/1) was another eleven lengths back in third.

Sympa Des Flos, who was sent off the 9/4 favourite, weakened quickly approaching the third last and was soon pulled up.

Meade, who was earlier on the mark with Lord In Red, said: "He was bound for the sales and I pleaded for him, so they kept him, and hopefully he’ll go on now and build on that.

* P. Townend, rider of Sympa Des Flos (FR) trained by W.P. Mullins, reported to the Clerk of Scales that his mount pulled up injured.