Coen lands first Group winner on Know It All 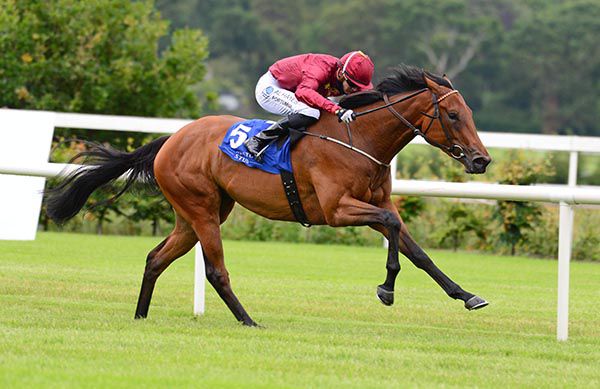 3lbs claimer Ben Coen landed his first Group winner when Know It All ran out a comfortable winner of the Group 3 Derrinstown Stud Fillies’ Stakes.

Always travelling sweetly just behind the leaders on the inside, it opened up nicely for the Qatar Racing-owned filly two furlongs from home and she went on to score by two and a quarter lengths from Celestial Object with Ridenza in third.

15/8 favourite So Wonderful was ridden prominently but faded to finish seventh.

The winner broke her maiden at the Curragh last year and was twice Group 3-placed before this victory, and seemed to have no problem with the extra furlong having done all her previous racing over 7f.

Winning trainer Johnny Murtagh said: “She seemed to have come forward from her last run judged by her work and Ben was very happy with her coming here.

“I thought she’d take a bit of beating and thankfully she’s done it like that. She’s an exciting filly and I’m really looking forward to the rest of the season.

“Sheikh Fahad was on the phone and is very happy so I’ll speak to him and see what we’re going to do.

"She has some big entries and hopefully she’ll be able to fulfill them.

“I think seven (furlongs) or a mile is good. She has plenty of pace and travels really well.”