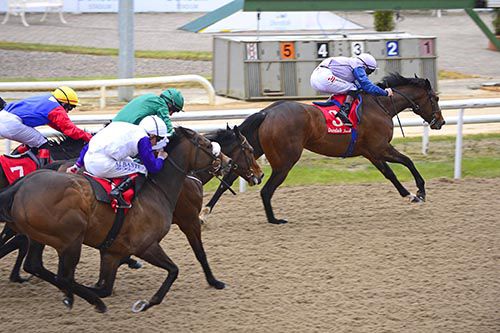 The consistent Ardhoomey got a second career success to his name as he ran out a good winner of the irishinjuredjockeys.com Handicap.

Successful in a maiden at Navan last May, the son of Dark Angel then finished second in a Listed race at Cork, before finishing a good fourth in the Rockingham at the Curragh.

Third on his last two starts over the course and distance, the Ger Lyons trained four-year-old was sent off a 5/1 chance today on his first start since September.

Settled behind the leader in third he got a lovely run through on the rail from two furlongs out.

He cruised into the lead a furlong and a half from home, and he kept up the gallop in the closing stages, going on to score by a length and three parts under Colin Keane for the Moyville Racing Syndicate.

Kasbah was sent off the 7/4 favourite and he finished second under Connor King for Johnny Murtagh, while Master Speaker (4/1) was a short head back in third under Pat Smullen for Martin Hassett.

Ger Lyons, who was recording his second winner in as many days, said afterwards: "He's a lovely horse - a gentleman.

"We did another wind operation on him after his last run last year and without question he's a better horse for it.

"If it holds up we'll have great fun with him after that performance. He's in the Endless Drama league if everything worked. You'd have to say that was a good performance.

"I put him in the Greenland at the early closing stage but obviously he needs top of the ground.

"Colin said there is no reason to step him up in trip. I'd love to go seven with him but you're just asking for trouble."

* The Stewards interviewed G.F. Carroll, rider of Togoville, concerning the fact that he appeared to move across before reaching the marker poles. Having viewed the recording of the race and considered evidence from the rider, the Stewards were of the opinion that G.F. Carroll was in breach of Rule 211 by failing to ride in a straight line from his draw until reaching the marker poles and consequently fined him €100 having taken his good previous record into consideration.

* The Stewards enquired into an incident before the marker poles involving Togoville, ridden by G.F. Carroll, placed fourth, Ostatnia, ridden by W.J. Lee, unplaced and Sors, ridden by C.D. Hayes, placed sixth, where it appeared that Togoville came across before the marker poles and caused interference in so doing. Evidence was heard from the riders concerned. Having viewed the recording of the race and considered the evidence, the Stewards were of the opinion that the incident was caused by G.F. Carroll riding carelessly and consequently suspended him for 2 racedays having taken his previous recent record into consideration.

* C.D. Hayes, rider of Sors trained by Andrew Slattery, reported to the Clerk of Scales that his mount fly leaped out of stalls losing a little ground in so doing.