Could It Be Love could be bound for better things 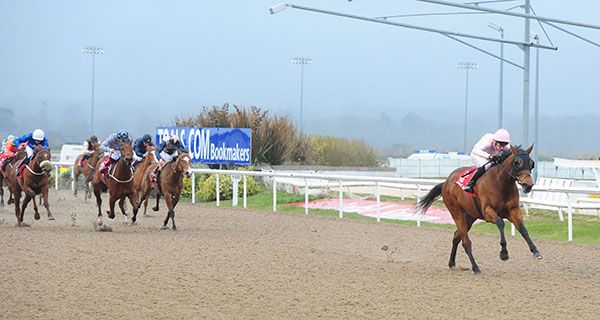 On polytrack debut with blinkers on first time Could It Be Love (4/1) destroyed the opposition under Donnacha O'Brien in the Irish Stallion Farms EBF Fillies Maiden at Dundalk.

O'Brien had the daughter of War Front out quick from her wide draw in fourteen, and off the front end she lengthened away inside the final two as her stable companion Hence (evens favourite) floundered.

Hence eventually finished sixth for Seamie Heffernan as Could It Be Love accounted for promising newcomer Terzetto by six and a half lengths.

"She had been working very well at home and the step up to seven suited her," said Donnacha O'Brien on his father Aidan's charge.

"As you can see she's a monster of a filly so probably with the extra year she grew into herself better. She's not a bad filly.

"She's probably a stakes filly. Quick ground is going to be important to her, over seven furlongs or a mile.

"She's American-bred, they are all sharp and have those reflexes. I didn't even have to give her a squeeze to get to the front and that's a big advantage around here."

The Stewards fined Charles O'Brien, trainer, €350 for lodging a passport in respect of Gala N Dandy, in which the vaccinations did not conform with the provisions of Rule 91. The Stewards allowed the horse to run on receipt of the trainer's written assurance that the vaccinations were in order.

The Irish Horseracing Regulatory Board Veterinary Officer examined Hence, trained by A.P.O'Brien, at the request of the Stewards and reported the animal to be post race normal.

C. O'Donoghue, rider of Rise Over Cloud, trained by Mrs John Harrington, reported to the Stewards' Secretaries that his mount got upset in the stalls and jumped out awkwardly.