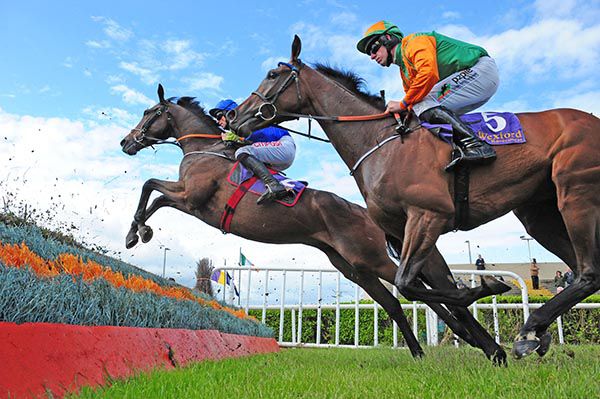 Dinons enhanced his remarkable win-rate at Wexford today as the Gordon Elliott trained gelding maintained his unbeaten chase record with a win in the Barrow Novice Chase under jockey Davy Russell.

The son of Balko began his winning-spree in a maiden hurdle at Roscommon in August 2018 and today chalked up form-figures of '111117-P11', to score a seventh win in his last nine starts, and follow up his chase debut win at Killarney last month.

Following the race Elliott stated “he is a grand horse and knows how to win. He never does anything fancy, he just keeps winning and is a nice horse to have. Davy said he probably should have let him stride on but that's not a bad mare of Colin Bowe's (length and a half runner-up Victoria Bay) either. All you can do is win and he won.

"I think you could even step him right up to three miles, it will suit him better. Davy said he was nearly going as fast as he could for the first half of the race. We'll find another winners' race for him somewhere now."