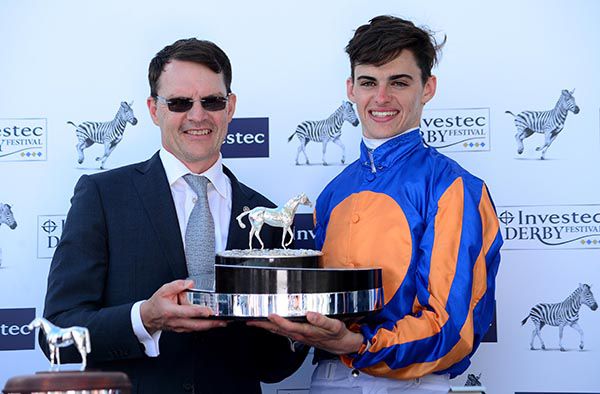 Donnacha O’Brien was officially crowned Irish champion Flat jockey for the second time on the final day of the season at Naas.

The defending champion began the afternoon with a tally of 110 winners for the campaign — giving him an unassailable lead of seven over the 2017 champion jockey Colin Keane, who had a book of six rides.

It has been a titanic battle between the pair for much of the year — before O’Brien pulled clear in the final weeks — and they fittingly fought out a thrilling finish to the Irish Stallion Farms EBF Maiden on the last day.

Nobel Prize and Chiricahua were the 6-4 joint-favourites under O’Brien and Keane respectively, and it was the former who claimed top honours by just a head.

O’Brien’s title race victory means he matches the feat of his older brother Joseph, who won back-to-back championships in in 2012 and 2013.

Donnacha O’Brien said: “It’s a relief to win it and to have it over and done. It’s head-frying (going for the jockeys’ championship), and I don’t know how lads like AP (McCoy) and Pat (Smullen) kept going for so many years. It drains you doing it one or two years, so I can only imagine what they went through.

“Colin (Keane) is someone I have the utmost respect for, and to ride over 100 winners in a season not riding for dad (Aidan O’Brien) or Joseph is incredible. It’s a true test of how good he is.

“I have been getting unbelievable support from the Magnier, Smith and Tabor families — and I owe everything to them and dad. To be able to ride so many good horses is a real privilege.

“I’m going on holidays tomorrow morning, so I’m looking forward to that. Everyone seems to want me to retire, but we’ll think about that on another day.”

Bowerman bound for Lingfield via Dundalk

Bowerman is likely to represent Adrian McGuinness in the Winter Derby at Lingfield on February 27.

Ghaiyyath has been crowned as the Longines World’s Best Racehorse for 2020.

Owner Garth Broom is optimistic the fire still burns brightly in Native River as the 2018 Gold Cup winner returns to the scene of his finest hour for the Cotswold Chase.