Drama but favourite Bailly home in Down Royal opener 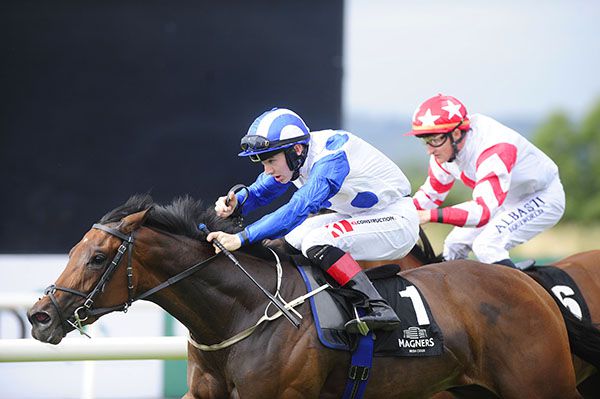 The 100 percent Magners Irish Cider Race (Plus 10 Race) at Down Royal wasn't without its dramas before Bailly took the spoils at odds of 8/13.

Kodi Dream stumbled and unseated Leigh Roche (replaced by Chris Hayes on Lavinuela in the 6.05) two furlongs out, whilst third home Glamorous Power took a jump in running under a furlong out.

The Ger Lyons-trained and Colin Keane-ridden Bailly eventually came home with three parts of a length to spare over Sundance Star.

Lyons said afterwards: "That was lovely. She's very much a project as I said in Bellewstown. She's a filly with plenty of ability - five (furlongs) is way too sharp for her.

"She is head back and ears back and just wants to please and our job at the minute is to try and teach her to put the pieces together quietly.

"The Curragh Stakes is the next obvious target for her and she is going to be better with a year on her back.

"I know it is very warm but she got a bit warm around the neck which worried me but Colin said once he got on her she loved it and she was a lady.

"We are going the right way - onwards and upwards."

Leigh Roche was taken to hospital for precautionary x-rays.

The Stewards fined J.P. Murtagh, trainer, €350 for lodging a passport in respect of Heart Stealer, in which the vaccinations did not conform with the provisions of Rule 91.

The Stewards ordered the withdrawal of Heart Stealer in accordance with the provisions of Rule 90 (iv).

The Stewards requested a report from L.F. Roche, who was detained in the ambulance room, regarding the fall on the flat of Kodi Dream (GB) approximately mid way through this race.

L.F. Roche reported that his mount took a false step at the roadway, unseating him.

Reports were also requested from G.P. Brouder and R.P. Downey.

Having considered the evidence and viewed a recording of the race, the Stewards were satisfied that the fall was independent and they therefore took no further action.