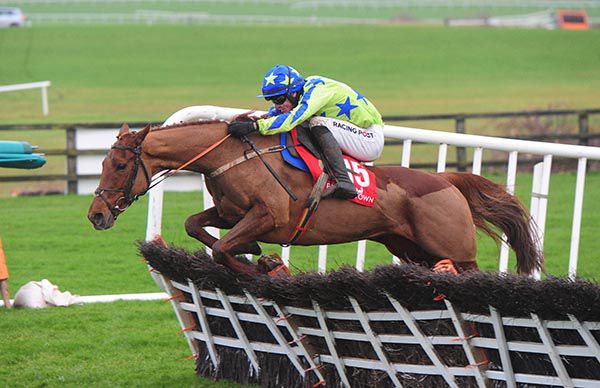 Willie Mullins sent out a one two in the I.N.H. Stallion Owners EBF Maiden Hurdle at Punchestown as Drury (9/2) accounted for Minella Encore (11/8 favourite) by sixteen lengths.

Under Mullins' nephew Danny, Drury made her race fitness count to easily prevail against a stable companion coming back off a 661 day break.

Out of a half-sister to Best Mate Drury certainly had her supporters at bigger prices earlier and she was adding to bumper gains from Cork back in August. The chestnut herself is a half-sister to Champ.

“We’ll look for something around Christmas or the New Year for her. I was pleasantly surprised that going out in trip has brought about improvement and she could go further.”

E. Walsh, rider of Larry Looby trained by Desmond McDonogh, reported to the Clerk of Scales that his mount did not act on todays going.

At the request of the Stewards, B. Browne, rider of Aarons Day, trained by Oliver McKiernan, reported to the Stewards' Secretaries that his mount narrowly avoided being brought down by fallers and jumped with no confidence thereafter.