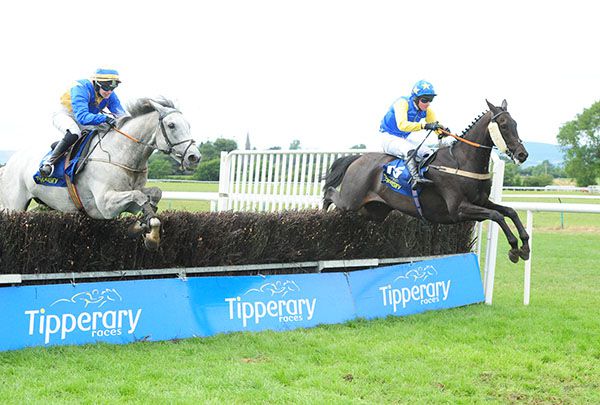 Oighear Dubh bids to gain compensation for a luckless run at Cheltenham last week in the Paddy Power Cork Grand National on Sunday.

Trained by Eugene O’Sullivan, the seven-year-old looked sure to provide the trainer’s teenage son, Michael, with a first winner at Prestbury Park when racing into a commanding lead after the final fence in an amateur rider's chase.

However, Oighear Dubh ran out through the tape that is put across a section of the track to doll off the run-in from the rest of the course, unseating O'Sullivan junior and leaving the heartbroken young rider in tears.

Mark Enright takes over in the saddle as the grey turns out just nine days later for this E50,000 feature.

O’Sullivan senior, who has enjoyed a winner at Cheltenham courtesy of 1991 Foxhunter Chase hero Lovely Citizen, said: "We're maybe clutching a straws, running him back so soon, but we were surprised how well he came out of that run. We wouldn’t be running him if we weren’t happy with him.

"What happened in Cheltenham was devastating for the young lad. His dad has been lucky to have a winner in Cheltenham, he looked like he was going to have one and it didn’t happen.

"Cheltenham is holy ground in our sport and for a young lad like him to have a winner there would have been huge.

"It’s not easy to get those opportunities, especially when you're in Ireland.

"The horse seems well and hopefully they don’t get too much rain.

"The trip (three and a half miles) is an unknown to us, but he looked to be staying well at Cheltenham."

Oighear Dubh features in a maximum field of 20 runners.

Gordon Elliott has a strong hand with Rogue Angel, Out Sam, Poormans Hill and Timiyan all in contention.

Willie Mullins relies on Minella Beau, while other contenders include Michael Hourigan’s The Gatechecker and Gavin Cromwell’s 13-year-old Raz De Maree, who claimed this prize in 2016.

The Mullins-trained Robin Des Foret heads eight hopefuls and must have every chance of rediscovering the winning trail under Ruby Walsh.

His rivals include the Noel Meade’s Clara Sorrento, the Joseph O’Brien-trained Young Turk and Winter Escape from Aidan Howard’s yard.

Percy Veer is on a hat-trick following successive wins for Eric McNamara.

Elsewhere on the card, Eclair De Beaufeu is an interesting recruit for Elliott and Gigginstown. The dual French bumper winner presumably cost a pretty penny and debuts over obstacles in the Paddy’s Super Enhancements Maiden Hurdle.

Mullins’ decisive Punchestown victor Royal Illusion looks the one to be on in the concluding mares’ bumper.