Early scare but no problem in the end for Togoville 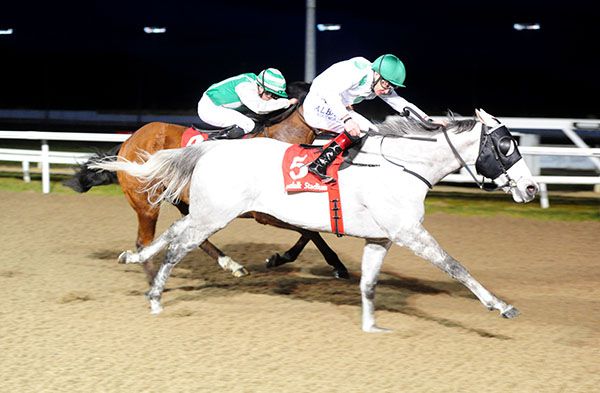 Favourite backers had their hearts in the mouths at the start of the Fyffes Race but all was well that ended well for Togoville (13/8 into 11/10) at Dundalk.

The likeable grey stumbled and went right leaving the stalls.

Pat Smullen's mount was soon in front though, and the Offaly man asked for more two furlongs out.

Strongly pressed over a furlong out, Togoville kept on well under pressure in the final furlong to defeat Primo Uomo (4/5 out to 11/8) by half a length.

The front pair left Captain Dion five and a half lengths back in third.

"He was supposed to run last week but I took him out for a pick of grass and he got down for a bit of a roll but he stumbled a bit and wasn't a hundred per cent sound," said winning trainer Anthony McCann.

"I think he must have just bruised a foot so we decided to wait for this. He's a fantastic horse and easy to train. Big thanks to Patrick McCann for giving me a couple of horses and the opportunity with a good horse like that.

"He clipped into himself at the start and pulled a shoe but we've come out the other side of it and he's alright thank God."

Damian Joseph English, trainer of Bluesbreaker, reported to the Clerk of Scales that his charge struck into himself and as a result pulled a front shoe.

Doncaster on Saturday the next stop for Shishkin

Shishkin is all set to make his eagerly-awaited next appearance in the Irish Thoroughbred Marketing Lightning Novices’ Chase at Doncaster on Saturday.

Inspection on Friday ahead of Cheltenham Saturday Festival Trials Day

Saturday’s high-profile fixture at Cheltenham is in doubt after officials called a precautionary inspection for 2pm on Friday.