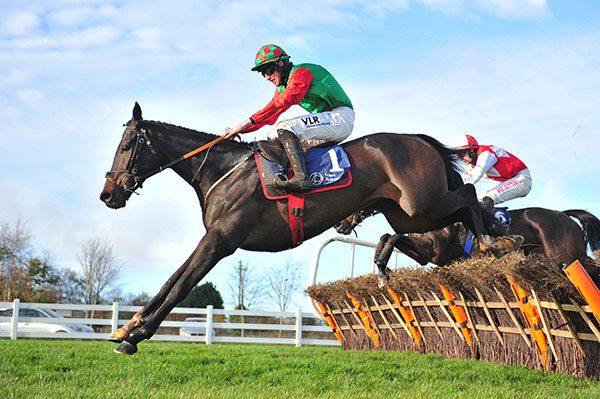 Gordon Elliott registered his sixth consecutive century of seasonal wins at Naas today as his Call Me Lyreen maintained an unbeaten record to win the Grade 2 Old Persian At Glenview Fishery Lane Hurdle.

The son of Court Cave had, in September and October, won hurdles at Tramore and Sligo and today under jockey Jack Kennedy maintained his unblemished record when fending off runner-up Wolf Prince by a length and three parts.

Elliott first achieved 100 winners in 2015/16 and has done so every season since, and recorded 210 winners in 2017/18, which was two short of Willie Mullins' record total in the same season.

Following today's race the Championship-chaser reported by phone “he’s a lovely horse and is stepping forward all the time. We were not sure about the ground but he coped with it well.

“He’ll have a little break and go for one of the novice hurdles at the Dublin Racing Festival.

“Keith (Donoghue) deserves a lot of credit as he’s done a lot of work with this horse at home.”

Jockey Kennedy added “we went a good gallop the whole way. He was a bit behind the bridle but turning into the straight he came alive and I probably got there a bit soon on him.

“He’s a nice horse and hopefully he can keep improving. He ground was a question mark but he handled it well.”