Elvis makes all in the feature at Thurles 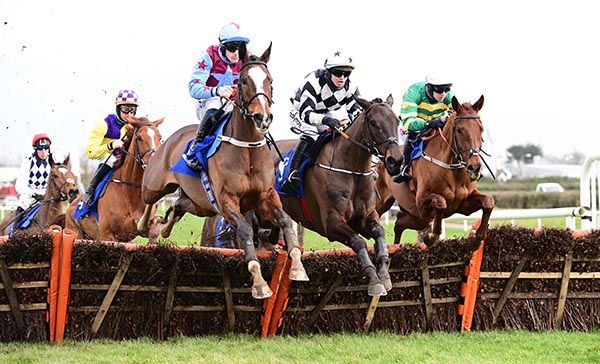 Velvet Elvis made all to take the feature at Thurles this afternoon, the Horse & Jockey Rated Novice Hurdle.

A good second to Torygraph at Fairyhouse in December, the Tom Gibney trained five-year-old was then successful on his next start at Cork.

Sent off an 8/1 chance this afternoon (from 12s), the son of Shirocco was soon in front under Darragh O'Keeffe and kept on well when ridden from two out, going on to score by three-and-a-half lengths in the colours of owner Derek Kierans.

Capilano Bridge (9/2) took second under Ricky Doyle for Conor O'Dwyer, while Capodanno (15/8f), who was squeezed for room two out, ran on well to take third, another four and a half lengths back.

Broomfields Jeremy (5/2) fell with just over a circuit to race.

Gibney said afterwards: "He is a very straightforward horse to do anything with and we thought conditions would really suit him. When I got here and Darragh told me the ground was terrible I was quite happy to hear that.

"I thought the trip might be a bit short for him but conditions nullified that.

"He was bought for chasing and probably will do that next year. We might look at the valuable three miles novice handicap hurdle at Fairyhouse next."