English King heading Down Under after lucrative sale 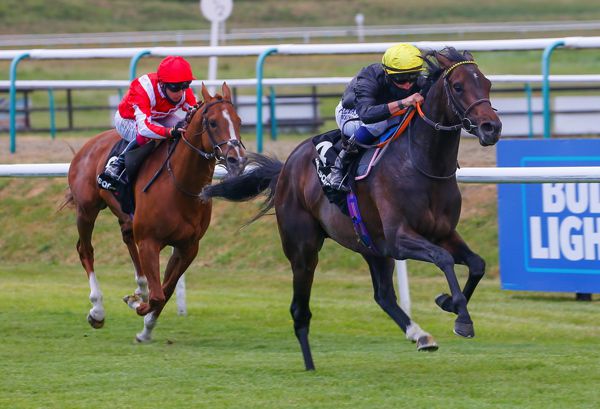 English King is set to continue his career in Australia after being sold for 925,000 guineas at the Tattersalls Autumn Horses In Training Sale on Wednesday.

The three-year-old won the Lingfield Derby Trial on his seasonal bow for trainer Ed Walker back in June, setting a new course record as he beat subsequent St Leger second Berkshire Rocco by two and three-quarter lengths.

English King went on to claim a fast-finishing fifth in the Derby at Epsom, fourth in the Gordon Stakes at Goodwood and sixth in the Grand Prix de Paris last month for owner Bjorn Nielsen.

Bidding for English King opened at 400,000 guineas and after a battle between Ted Voute and Armando Duarte, with both bidders talking to their global contacts, Duarte eventually secured the colt for Ballymore Stables Australia and Paul Moroney Bloodstock.

Walker told www.tattersalls.com: “It has been a perfect storm. In a normal year Bjorn may have sold more yearlings and he may have been up for competing internationally with this horse from home, but when I tried to persuade Bjorn to keep him and aim for all these big races in Australia and Hong Kong and around the world, quite rightly Bjorn was worried as to whether we’d be able to race in those races? Will racing be happening? Will we be able to travel? Will the horse be able to travel?

“Unfortunately it is a perfect storm. I would have loved to hang on to him, but a great result and Bjorn puts a lot into the game and it is great to get a big result like that.”

Looking back on English King’s campaign, Walker added: “We have had a great journey with him, and he made lock-down a bit more interesting! It was a wonderful season and it did not end as we hoped it would — I am still looking for my first Group One winner and I was certain he would be it, things just played against him.

“He had a couple of very hard races — you don’t break a 30-year-track record without giving your all, he had a hard race at Lingfield, and then a very hard race in the Derby when he ran an absolute blinder.

“His next two races weren’t up to that level, but he is not a big horse and those races probably took their toll.

“I am very grateful to the guys who bought him and wish them every bit of luck and I hope he wins the Melbourne Cup for them. I think he is tailor-made for the Cup — he’ll stay, he travels, he loves fast ground and I will be thrilled if he does that for them.”

Paul Moroney, via Duarte, said: “English King’s track record performance winning the Lingfield Derby Trial beating St Leger runner-up Berkshire Rocco was one of the most breathtakingly dominant performances anywhere this year. He is clearly a highly talented colt with loads of quality and we are thrilled to have secured him.

“We’ve bought him for a syndicate headed by two New Zealand businessman and a collection of Ballymore Stables’ Australian clients.

“He’s certainly an exciting addition to the team and our first time playing at this very high level, so one could say the pressure is on for him to perform. He will head Down Under in December to join Mike (Moroney’s) Flemington stable early January and play things by ear.

“He will likely race in our autumn, but next spring will be the main focus going forward.”

English King topped the previous best price given for a colt at the sale, with Summer Sands fetching 625,000 guineas last year.

Aljazzi holds the record for the highest-priced lot ever sold at the Autumn Horses In Training Sale after she changed hands for 1,000,000 guineas in 2018.