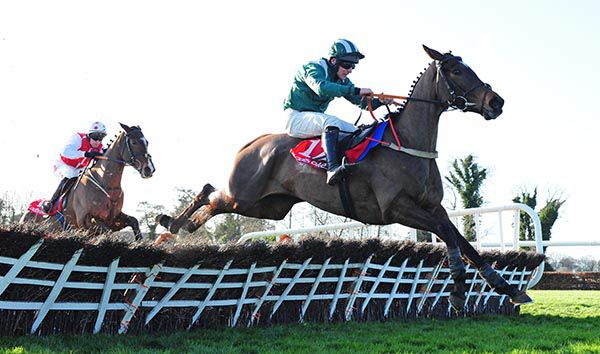 Owned by Joan Sweeney and trained by her husband Rodger, the successful four-year-old Battle Of Marengo filly was contesting her first handicap in this two miler.

Sixth over the course and distance on her last appearance in November, behind the star of the juvenile hurdling division, Aspire Tower, Sean Says didn’t go un-backed for this assignment at 11/1.

Enright kept it simple from near the front on the Castlelyons runner, and the winner was brave in fending off Saol Iontach by three parts of a length.

“That equals my best total for a season (30 wins) so hopefully I can better that in the next few months and stay injury free," said Enright.

“Ken Whelan, my agent, is doing a great job and is getting me loads of rides.

“This filly did it nicely. She had a nice run here in a three-year-old maiden behind Aspire Tower and everything ahead of her then has either won or run well since.

“She had only 10st3lb on her back today and she handles that soft ground and jumps well. The last was the only one she got wrong. She idled a bit in front and got underneath it but she picked up when I got stuck into her.

“She stays well and Rodger told me going out to jump off as close as you can as she will stay strong. She’s even strengthened up since the last time I rode her.”

E. Walsh, rider of Magic Sea trained by Sarah Dawson, reported to the Clerk of Scales that his mount did not handle the ground.

The Irish Horseracing Regulatory Board Veterinary Officer examined Magic Sea, trained by Sarah Dawson, at the request of the Stewards and reported the animal to have coughed twice during this post race examination.