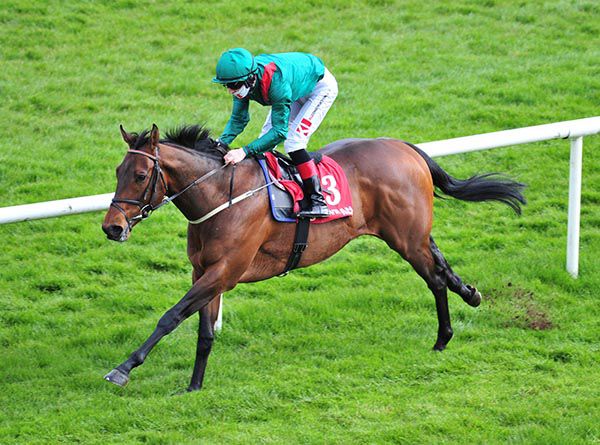 The two horses with a run this year took gold and silver in the Irish Stallion Farms EBF Race at Gowran as Erzindjan led home Laelaps.

This pair had finished seventh and tenth respectively behind Amazed By Grace in the Madrid Handicap at the Curragh on the opening afternoon eighteen days back.

Here Ryan Moore, on his first visit to Gowran, ended up fifth of the six on favourite Roman Emperor, fading after trying to get it done from the front.

Up front Erzindjan, with Colin Keane up in the Aga Khan silks for Dermot Weld, got it done convincingly by two and three parts of a length from Laelaps.

“He ran better at the Curragh than his finishing position suggested. He was very good in Cork last year.

“The step up to a mile today suited him well and we'll go back up to stakes level with him next time. Maybe a race like the Amethyst at Leopardstown would suit.

“He's a beautifully bred colt. His dam is a half-sister to Eziyra and she was very good herself.

“He's a nice colt going forward for the year, all being well.”

The Irish Horseracing Regulatory Board Veterinary Officer examined Roman Empire, trained by A.P.O'Brien, at the request of the Stewards and reported the animal to be post race normal.

R.P. Whelan, rider of Allez Barza (FR) trained by M.Halford, reported to the Clerk of Scales that his mount stopped quickly.

S. Foley, rider of Laelaps trained by Mrs John Harrington, reported to the Clerk of Scales that his mount jumped right leaving the stalls.

The Irish Horseracing Regulatory Board Veterinary Officer examined Allez Barza (FR), at the request of trainer, M.Halford, and reported the animal to be clinically abnormal.