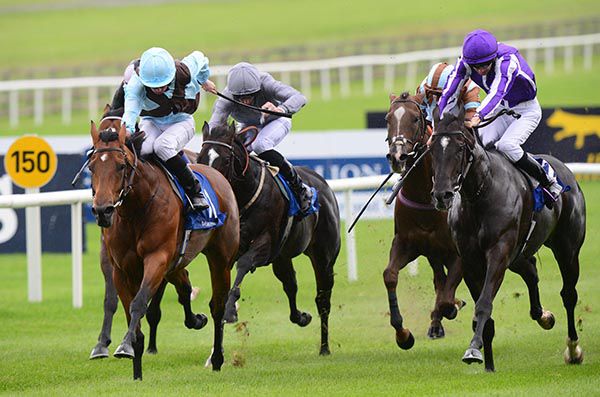 Aidan O'Brien dominated the finish of the Group 1 Derrinstown Stud Flying Five Stakes at the Curragh as Fairyland pipped So Perfect by a short head.

Caspian Prince blazed a trail but gave best approaching the final furlong as Fairyland swept by on the inner.

Stable companion So Perfect strongly challenged her in the final 100 yards but it was Fairyland who flashed past the post just in front at 12/1.

The runner-up was also a 12/1 chance and she was a length and a half ahead of British-raider Invincible Army (12/1).

Soffia went off a well backed 13/8 favourite but could make no impression on the leaders in fifth.

Aidan O’Brien said: “Her best run of the year was back at five at Ascot in the King’s Stand.

"The ground was too soft for her at Haydock and she got upset in the stalls and banged her head before that (at York).

“You would have to be delighted with both of them and I ‘d say they will go for the Abbaye.

“Fairyland is qualified now for the Breeders' Cup but Mrs Stockwell and the lads will decide on that.

“She was bought originally to go to Galileo, so I’d doubt she will stay in training next year.”

The Irish Horseracing Regulatory Board Veterinary Officer examined Soffia, trained by Edward Lynam, at the request of the Stewards and reported that the animal was found to have blood on the nose as a result of exercise induced pulmonary haemorrhage.

D.P. McDonogh, rider of Soffia trained by Edward Lynam, reported to the Clerk of Scales that his mount burst a blood vessel during this race.