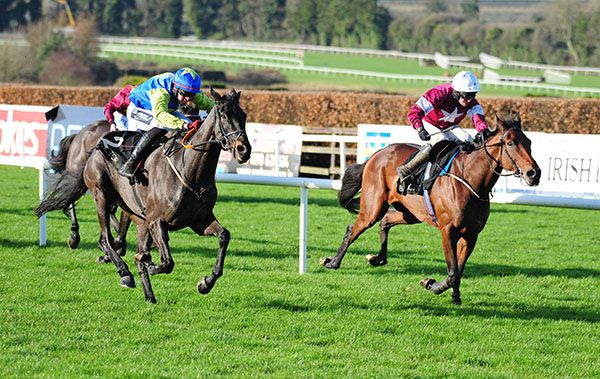 The Gordon Elliott-trained Fakiera stormed home on the run-in to get up close home and land the spoils in the BetVictor Casino 'Monksfield' Novice Hurdle at Navan.

Even-money favourite Farouk D'alene took them along in the early stages of the two-and-a-half mile contest but jumped out to his right at several flights.

Fire Attack pulled his way to the front after the fifth last and led them for home in the Grade 3 contest.

The Joseph O'Brien-trained gelding looked to have done enough over the last but was chased down on the run-in as Keith Donoghue got a great tune from his mount.

4/1 shot Fakiera hit top gear in the closing stages to get up for a half length success. Stable-mate Farouk D'alene could only finish fourth.

“He did it well. He travelled easy during the race and was probably doing a little bit too much,” said Donoghue.

“He relaxed coming out of the back straight and I wasn't in a rush with him as I knew he'd come home well.

“When we jumped the third last they quickened and I probably got caught for a bit of toe but once we hit the rising ground he started to hit top gear.

“I knew jumping the last we had a good chance as the horse in front had been keen.

“Stamina is his thing and he did well to win over two miles. We always knew with a step up in trip that he would improve.

“It's good for Tim O'Driscoll to have a good horse again.”

Paddy Power gave Fakiera a first show of 25/1 for the Albert Bartlett and 33/1 for the Ballymore.