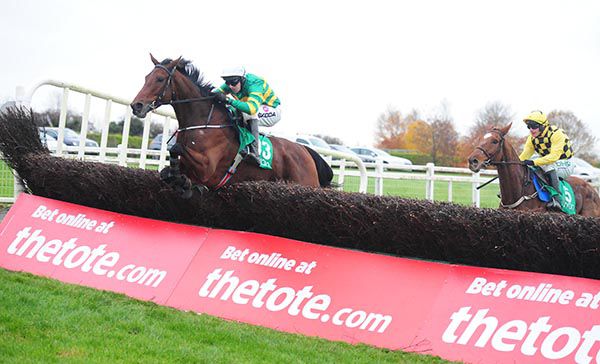 Last season’s Arkle runner-up Fakir D’oudairies faces some familiar rivals on his return to action in the Poplar Square Chase at Naas on Saturday.

Formerly a high-class juvenile hurdler, the JP McManus-owned five-year-old made a smooth transition to the larger obstacles for Joseph O’Brien last season — scoring on his chasing debut at Navan before claiming Grade One honours in the Drinmore at Fairyhouse.

He subsequently chased home Notebook at Leopardstown, before finding only Put The Kettle On too strong in the Arkle Trophy at Cheltenham.

Frank Berry, the owner’s racing manager, said: “He impressed many last year and he was just unlucky that he ran into one in the Arkle.

“He’s got a penalty to carry, so he’s having to give weight to some good horses, which makes it not that simple. He’s in good form, though, and Joseph has chosen to start him off here.

“It’s all about getting him started, he won the Drinmore over further last year but he’s not short of pace.

“I’m sure whatever he does he’ll improve for the run.”

After beating Fakir D’oudairies before following up in the Irish Arkle, Notebook was favourite for the Arkle itself at the Festival in March, but finished a disappointing sixth.

Trainer Henry de Bromhead is hopeful he can bounce back on his return to action, saying: “He seems in great form and we’re looking forward to getting him out again.

“He’s ready to start back his season.”

The Willie Mullins-trained Cash Back was runner-up to Notebook in the Irish Arkle, but fell when beaten at Cheltenham.

The other Grade Two on the card is the Old Persian At Glenview Stud Fishery Lane Hurdle, in which Gordon Elliott’s Call Me Lyreen puts his unbeaten record on the line against Mullins’ French recruit Gars En Noir, among others.