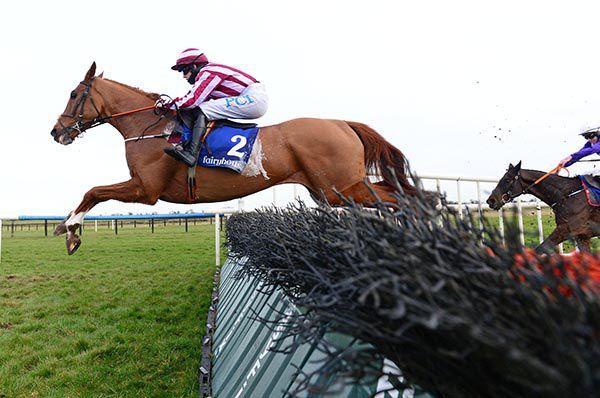 Full Time Score rewarded connections for their patience when reappearing after a near two years break to take division two of the Fairyhouse Easter Festival 3rd — 5th April Maiden Hurdle.

The Flemensfirth gelding was runner-up on his only point-to-point start but wasn’t seen since finishing third on his debut under rules in a Gowran Park bumper.

Trained by Henry de Bromhead for Chris Jones, the seven-year-old was the only ride on the day for Rachael Blackmore and punters took the hint making him the 10/11 favourite.

Blackmore kept him wide in search of some better ground leading early in the straight and, aided by fine leaps at the final two hurdles, kept on well for a cosy length and a quarter victory over Fire Squadron.

The pair pulled nine and a half lengths clear of the promising Surprise Package in third.

Blackmore, now three behind (82-79) Paul Townend in the jump jockeys title race, said “It was a very good performance for a horse that hasn't run in nearly two years.

“I'm delighted with him. He's had his problems so it's good to get him back on track. He's a lovely big horse and hopefully there are plenty more good days in him.

“He's a typical one of Henry's. They know their job. It's nice when they are off for so long that they can repay their connections.”